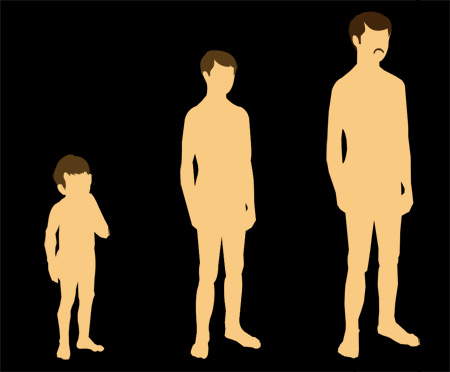 As discussed in the previous feature on PCOS, early onset of puberty may lead to hormonal disorders in girls. In general, girls do mature faster than boys. The legal age of marriage for boys is 21 and for girls is 18, popular television soaps not withstanding.

Society expects its members to act age-appropriate. Hence, the aforementioned age limits to marriage, right to vote etc. The onset of puberty entails not only physical changes but also behavioral ones. The average age of menarche in India is around 13 years. It is found to be higher in rural girls (around 14 years) than urban girls (around 12 years). This is probably due to better socioeconomic conditions in cities as will be discussed later on. Menarche is the onset of menstruation in girls. Signs of puberty such as under-arm/pubic or facial hair growth and breast development may begin much earlier. In general, if such development is noticed before age 8 in girls and age 9 in boys, it may be a cause of concern.

Apart from societal concerns, early puberty (also known as precocious puberty) may be indicative of or lead to a number of complications. It may be due to an infection or an abnormality such as brain tumor or hormonal gland malfunctioning. Apart from these cases, boys may not be at much risk if they reach puberty early. However, as discussed in the previous feature, girls may be quite prone to this risk. Apart from PCOS, early onset of puberty and menarche may put girls at an increased risk of cancer, diabetes, cardiovascular disease and infertility later in life. Even if a major medical condition does not occur, early puberty and concurrent growth spurts can leave adolescents feeling out of place in their classrooms and other communities. Although such growth spurts mean a child becomes taller and bigger than their peers, such a spurt runs out fast too. This means, the earlier one matures, their height will stop increasing at an earlier age than normal and eventually the boy/girl may remain shorter than their peers.

Importance of understanding the causes and risks involved:

The general observation that overtly sexual popular media content and a more ‘liberated’ society are leading to early puberty is not a scientifically proven one. Studies considering number and chronology of siblings, number and composition of family members and seasons have either shown that these factors don’t have a bearing or have been inconclusive. Race and heredity seem to be one factor. But far more important are weight and contamination. Puberty in any species indicates the onset of child bearing years. To go through the rigors of child birth a certain nutritional status is required. Thus, as socio-economic conditions of different populations around the world improve, the threshold weight, which happens to be 106 pounds (around 48 kgs), is being reached by more and more girls at an earlier age. In simpler words, people are becoming fatter earlier! A lot is to do with overly anxious parents who force feed and our great fast-food culture. The person who said “You are what you eat” may not have ever ‘super-sized’ his order at McDonald’s but he/she certainly got it right! Weight loss thus becomes an important aspect in any treatment regime as we will shortly discuss.

Contamination as we mentioned earlier may be another disconcerting factor. The modern world is awash with contamination, much of which is unfortunately not visible. Most of modern agriculture is made possible by fertilizers and pesticides. These are not only incorporated into the food we devour but are washed down streams and into ground water reserves. Hardcore carnivores need not rejoice, for the animals hunted/reared and consumed happen to feed on the same pesticide-laden farm produce. Things would be better if it was simply a matter of toxicity. However, toxicity may only be a footnote! Many of these pollutants resemble hormones structurally/chemically. What this means is that if a contaminant has enough receptor similarity with a human hormone, the body cannot differentiate between the two. Many of these pollutants resemble the female hormone estrogen and may induce early puberty and menarche.

Off course, we go on guzzling carbonated drinks out of ignorance or due to the trance-like hold advertisements seem to have on us or both. If the criminally high levels of pesticides (in some cases 200 times the permissible limit) discovered in popular soft drink brands and the subsequent very convenient-looking clean chits given to them can’t wake us up, its hard to imagine what else can. Whether pesticides in such consumables lead to early puberty may never be conclusively proven, not in our country any way. However, contamination is not the only ill-effect on offer, it’s a total package!

Extremely high levels of sugar are needed to make these concoctions of water, carbon dioxide and artificial colors and flavors palatable. The exact amount of sugar is very conveniently not required to be printed on the bottles. Though a fizzy drink may look innocuous in front of ‘heavier’ foodstuffs like cheese sandwiches or milkshakes but it sure packs a punch.

Refined sugar in such high concentration loads our system with empty calories. 330 ml of a soft drink may contain up to 9-10 tablespoons of sugar. That is more than half of all refined sugar an adult should consume in a day and nearly all the sugar a child of less than 10 years should consume.

In recent cases, muscular paralysis due to leaching of potassium and bone weakening due to leaching of calcium has been observed. These were however, in patients who consumed more than a liter of carbonated drinks per day for years altogether! ‘Why the hell would they do that?’ You are sure to ask. In a few words: nice and sweet, caffeine and ignorance.

A recent report right here on HealthJockey cites a research investigating PET bottles commonly used for storing drinking water. These bottles may also release estrogen-like compounds into the water they hold. There is no escaping it. In fact, I may have consumed a few parts per million right now as I write this feature!

So what have we learned?

We definitely know that children are growing up faster and not in the proverbial ‘how time flies’ kind of way. Among the causes, there are controllable and uncontrollable elements. We can’t change the air we breathe, the water available and ubiquitous PET bottles. Wholly organic food is too expensive and too scarcely available to be practical as of now in our country. However, what we can control is children’s weight. Now this, most of you will agree, is easier said than done. But that makes it even scarier is that no parent has to think ‘is my child old enough for McDonald’s?’ Talk to your children. Diet and exercise are acquired tastes for most people, especially kids. But keep them away from computers and indoor games during their formative years. A sedentary lifestyle is what most of us will be doomed to but it doesn’t have to start from childhood.

If you can’t get your children to leave their computers and go outside, get them a Wi-Fi game that at least gets them off the sofa! The kind of role models promoted in media also does not help. Even our sports stars are gulping down fizzy drinks, every time you turn on the idiot box, and urging you to do the same. It is a big challenge as a parent and it doesn’t help if you yourself are bursting at the seams and gorging on burgers at the same time!

Now you may say ‘lifestyle diseases’ are being blown out of proportion. But just think of it: you and I probably started having ‘western fast food’ and other sugary delights when we were in our teens or past our teens. The next generation is already there crowding up every fast food place in town. This next generation will practically spend their whole life on such a diet. No wonder health-care is touted as the next sunrise industry in India.

What can be done?

Off course, signs of puberty do not mean the menstrual cycle has also begun. Features such as under-arm/pubic or facial hair growth and breast development may appear a couple of years before the onset of menstruation. Not all cases of early puberty may lead to medical complications but the societal implications are also important.

Physical and emotional changes can lead to mood swings, depression and even aggression among adolescents. Teasing at school and otherwise also adds to the problem. Many studies have linked early puberty to crime, drug use and teenage pregnancies. Talk to your children and be frank in your discussions, they know a lot more than we think. Keep an eye on your child’s performance and other activities in school. Frequent visits to the pediatrician or other family physician is advisable. Pediatricians and endocrinologists have an increasingly important role to play. Equally if not of greater significance will be our weekend plans and restaurant hopping in general.