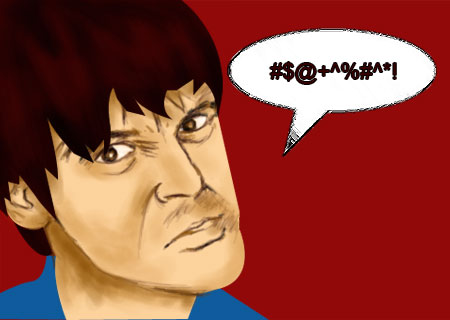 The findings of a new research may go against all that our parents have instilled in us! It seems that swearing may aid in increasing one’s tolerance to pain! These researchers believe that swearing may have a “pain-lessening effect” on an individual. This interesting connection was made by the researchers from the Keele University’s School of Psychology.

Swearing has long been known to be the most common way to react to pain. However, the fact that no connection was established between swearing and the actual experience of physical pain was believed to have astounded these researchers. Swearing is believed to have a “catastrophising” effect that exaggerates the severity of pain; therefore these experts have presumed that it could actually play a role in reducing one’s tolerance to pain.

This research was jointly conducted by Dr. Richard Stephens, John Atkins and Andrew Kingston. These researchers, in order to assess their presumption conducted a test on more than 60 undergraduate participants. All of these volunteers were apparently asked to dip their hand in ice water and keep it submerged for as long as they could. While keeping their hand in the ice water, these volunteers were believed to have been asked to keep repeating a swear word of their choice. Following this test, the volunteers were again asked to submerge their hand in the ice water, but this time they were asked to repeat a commonly used term that they would use to describe a table.

It was allegedly observed that the volunteers could manage to keep their hand submerged in the ice water for a longer period of time when they were using a swear word. Therefore these researchers believe that there may be a deeper link between swearing and pain tolerance.

Dr. Richard Stephens explains that, “Swearing has been around for centuries and is an almost universal human linguistic phenomenon. It taps into emotional brain centres and appears to arise in the right brain, whereas most language production occurs in the left cerebral hemisphere of the brain. Our research shows one potential reason why swearing developed and why it persists.”

It is presumed that pain triggers the “fight-or-flight” response in an individual and therefore has a pain-reducing effect. This theory was based on the accelerated heart rates of the participants when they used swear words, thereby suggesting greater aggression. It is suggested that swearing may not only generate an emotional response, but also a physical one.

This intriguing research has been published in the journal NeuroReport.