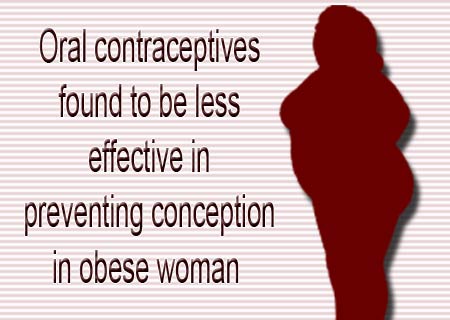 Obese women may have to bear the consequences of their greater body weight through a number of ways. The health effects associated with obesity are already known. However it has been stated that obese women may find oral contraceptives less effective in preventing pregnancy. Now, the potential biological mechanism which explains this claim has been identified by the experts at the Oregon State University.

These experts have stated that the conventional oral contraceptives take twice the time to reach the effective blood concentrations required by the body to prevent chances of pregnancy in obese women. This greater amount of time is believed to leave a “window of opportunity” every month, when the contraceptive may be that potent enough to prevent conception.

Ganesh Cherala, an assistant professor in the College of Pharmacy, Oregon State University, says, “We don’t have enough data yet to recommend that physicians change their clinical practice for use of oral contraceptives with patients who are very overweight. However, until more studies are done, women may wish to consult with their physicians about this issue and consider a backup method of contraception at some times of the month.”

The primary criterion is believed to be that, akin to the different drugs, even oral contraceptives may often be tested in “healthy” people and not in those who have weight issues.

“When we first test drugs for safety and efficacy, we generally do not include people with a high body mass index. But body weight and amounts of fat can seriously change the pharmacokinetics, or way drugs act and are processed in the body. There’s a growing awareness that we need to more carefully consider obesity and other factors that affect drug absorption, distribution, metabolism and other factors,” elucidates Cherala.

Although, increasing drug dosage is presumed to be an alternative to this problem, there may be certain health issues which may need to be considered. More so, it has been stated that often obese women are given low doses of this drug in order to lower their risk of developing venous thrombosis.

“Although our research has found this interaction between obese women and oral contraceptives, we don’t have enough information yet to recommend changes in clinical practice, other than choosing a contraceptive option that works better for both normal weight and obese women, like an intrauterine device,” notes lead author Dr. Alison Edelman, assistant director of the Family Panning Fellowship at Oregon Health and Science University.

Dr. Edelman also states that future analysis on oral contraceptives may be more beneficial if they included women having different body mass indexes, and not only those having normal body weight.

These observations are present in the journal Contraception.