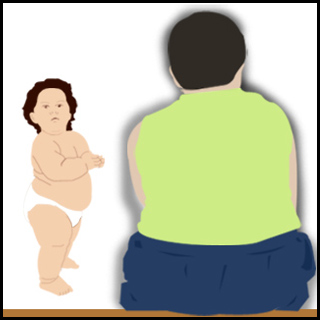 According to a new survey, in Australia there are still a number of parents who may be ignorant of the fact that their child may be overweight. Inspite of issuing a number of warnings, there are still some parents who are oblivious to the fact that their children may be overweight. This eye-opening survey was conducted by the national MBF Healthwatch.

These experts were astounded to note that almost only 8% of the children were rightly considered to be overweight by their parents. However, a latest report by the Australian Institute of Health and Welfare (AIHW), who says that these figures may be a gross underestimation, shows that 1/4th of all children may be either obese or overweight.

“Parents need to be extremely conscious that their failure to recognize these weight problems can be potentially damaging to their children in the long-term,” explains Dr. Christine Bennett, Chief Medical Officer, Bupa Australia. “Even taking into account recent suggestions that measures of overweight might be including some children on the border, many parents don’t pick up on the risk.”

The primary cause of childhood obesity was believed to include factors like poor diet, family eating habits and lack of physical activity. Evidently, once these children get overweight they may find it very difficult to lose their excess body weight. This fight against obesity may prove to be more difficult if they are having the wrong kind of a diet, or are having a sedentary lifestyle.

Apart from this, the experts also unraveled another astounding fact. It was noted that some parents may more often turn a blind eye to the weight of their child, if that child happens to be a boy rather than a girl. Seemingly, a little over 10% of the parents believed that their daughters were overweight, while only 5.5% believed that their sons were facing such weight issues.

“Unfortunately, this may mean an overwhelming number of boys experiencing weight problems will not receive timely assistance to rectify the problem as a direct result of their parents’ failure to recognize and address the problem at a young age,” points out Dr. Bennett.

Childhood obesity may be avoided if parents adopt a few lifestyle changes like; not only lead by example by having healthier food items, but also encouraging children to do the same. Apart from this, ensuring that families more often eat meals together may also be beneficial in preventing obesity. In order to make physical activity fun, children could themselves be allowed to choose the kind of activities they prefer, and also include rewards to encourage the child’s effort in the activities.

Fear of moving outdoor may be traced to walking difficulty in...