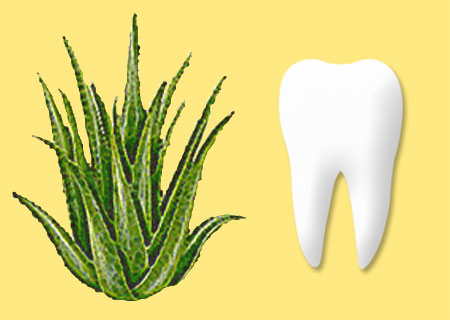 Since ages, aloe vera has been known to have healing effects. Some of its benefits include its healing effect on burns, wounds, cuts, diabetes, hair fall, etc. Since its ability to heal radiation burns was discovered in the 1930s, this plant is believed to be often used for various ailments. This magical plant, if we may call it so, is noted to be a common ingredient in various ointments for minor cuts, skin irritation, sunburn, etc.

However, recently aloe vera was also noticed to have beneficial effects on the teeth, as well. This plant is believed to often be used in tooth gels to cleanse and soothe the teeth and gum. Apart from this, it is also stated to have the ability to fight against cavities.

In addition to this, the experts further stated that aloe latex contains anthraquinones that are chemical compounds, which due to their anti-inflammatory nature may be useful in healing and arresting pain. Since aloe vera tooth gels are believed to be gentler on the teeth as compared to commercial toothpastes, they may prove to be a better option for use in people with sensitive teeth or gum.

Having said this, they have also stated that not all aloe vera tooth gel may have the right form of aloe vera in it. Allegedly, for the plant to be effective, products must contain the stabilized gel which is placed at the center of the aloe vera plant. More so, the products should also evidently follow certain manufacturing standards.

Dilip George, MDS, says that aloe, “must not be treated with excessive heat or filtered during the manufacturing process, as this destroys or reduces the effects of certain essential compounds, such as enzymes and polysaccharides.”

Eric Shapria, MS, DDS, MAGD, MA, Academy of General Dentistry spokesperson, says, “Thankfully, consumers with sensitive teeth or gums have a number of choices when it comes to their oral health, and aloe vera is one of them. If they are interested in a more alternative approach to oral hygiene, they should speak with their dentist to ensure that it meets the standards of organized dentistry, too.”

Dr. George has notably recommended users to consult non-profit associations in order to gain proper knowledge about which products have been given the organization’s seal of quality.