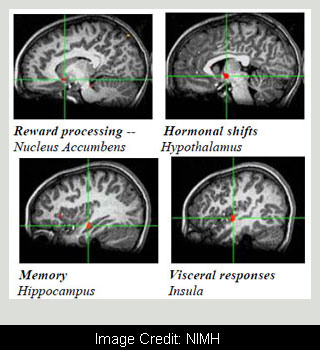 As teenagers’ drive for peer approval begins to overshadow their family ties, things change inside their brains – literally. Brain scans of teens seemed to have revealed that an emotion circuit gets activated more in girls as they mature in contrast to the boys. This study seems to demonstrate how emotion circuitry deviates in the male and female brain during the developmental stage.

Also, it was noted that girls were at an increased risk for developing mood and anxiety disorders. This study was carried out by Daniel Pine, M.D., of the National Institute of Mental Health (NIMH), part of National Institutes of Health, along with his colleagues.

“During this time of heightened sensitivity to interpersonal stress and peers’ perceptions, girls are becoming increasingly preoccupied with how individual peers view them, while boys tend to become more focused on their status within group pecking orders. However, in the study, the prospect of interacting with peers activated brain circuitry involved in approaching others, rather than circuitry responsible for withdrawal and fear, which is associated with anxiety and depression,” elucidates Pine.

Pine, Amanda Guyer, Ph.D., Eric Nelson, Ph.D., and colleagues at NIMH and Georgia State University, have reported on one of the earliest studies in order to reveal the functioning of the teen brain in a simulated real-world social interaction.

For the purpose of the study, experts were believed to have examined thirty-four psychiatrically healthy males and females. The subjects were between the age group of 9 to 17, and were participating in teenagers’ communications study via Internet chat rooms. They were informed that after a functional magnetic resonance imaging (fMRI) scan, they would chat online with another teen from a collaborating study location. fMRI is known to visualize the activities of the brain. Each subject was told to rate their interest in conversing with all of 40 teens displayed over the computer screen, so that they could be synchronized with a high interest subject.

After a period of 14 days, the teens viewed the same faces as in an fMRI scanner. However this time they were asked to make an assumption as to how interested the other prospective chatters would be in interacting with them. Soon after the task was over, the subjects discovered that the faces were of actors and not study subjects and that there would be no Internet chat. The circumstances was planned to keep the teens motivated during the tasks. This helped to make sure that the scanner would detect differences in brain circuit responses to high interest against low interest peers.

Experts selected the faces mainly for their happy expressions; their attractiveness was random, so that there appears to be a combination of typical peers gathered by teens. The teen participants seemed to consider the similar faces they chose at the beginning as high interest to be the peers most interested in interacting with them, as anticipated by the experts. Also, older subjects seemed likely to select more faces of the opposite sex than younger ones. However when experts evaluated the expected interest from peers of high interest as compared to peers with low interest, older females seemed to have shown more brain activity than younger females in circuitry which carries out social emotion.

Pine further stated that, “This developmental shift suggested a change in socio-emotional calculus from avoidance to approach.”

“In females, absence of activation in areas associated with mood and anxiety disorders, such as the amygdala, suggests that emotional responses to peers may be driven more by a brain network related to approach than to one related to fear and withdrawal. This reflects resilience to psychosocial stress among healthy female adolescents during this vulnerable period,” says Pine.

Pine and his colleagues were of the opinion that males in contrast to females showed slight change in most of the activity of these circuit areas through age, except for a decrease in activation of the insula. As teenage males tend to shift their interest to groups, they seem to reflect a decline of interpersonal emotional ties over time.

Also, it was noted that teenage girls in contrast to boys of the same age appeared to have activated nodes of a brain circuit for social emotion and approach behavior. This was because the functional MRI data covered anatomical MRI images.

The findings have been published in the Journal Child Development.