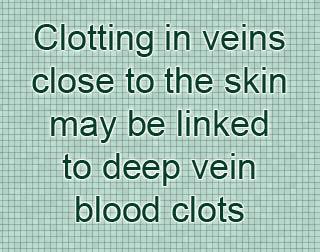 If a newly conducted study is to be believed then patients suffering from superficial vein thrombosis may have another thing to worry about. It seems that a small ratio of these patients may even have the potentially fatal condition known as deep vein thrombosis. This observation was made by Barbara Binder, MD, of the Medical University of Graz, Austria and colleagues.

Superficial vein thrombosis is stated to be clotting in the blood vessels which are close to the skin. Apparently, this condition is often not considered as a potentially fatal disease.

Supposedly, the assessed subjects also reported if they had a history of clotting events, any recent case of immobilization and active malignant disease, use of compression stockings and oral contraceptives.

This study has been published in the Archives of Dermatology, one of the journals of JAMA/Archives.