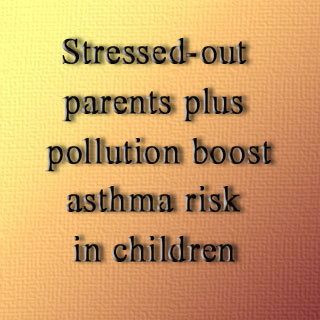 According to a latest study, children of stressful parents may have more chances of developing asthma. In addition, asthma is associated with environmental causes which include higher levels of traffic-related pollution and tobacco smoke. This study was performed by researchers at the Keck School of Medicine of USC.

In developed countries, asthma is known to be the most widespread chronic childhood illness and it has also been linked to environmental factors.

Experts collected data from the USC Children’s Health Study which was performing a study on respiratory health among children in 13 Southern California communities. In order to understand their study well, experts examined nearly 2,497 children with no record of respiratory problems over three years. Experts seem to keep a track on the children whether they developed asthma starting during pre-school or first grade.

They also calculated the parents’ education qualification and stress level with the help of a questionnaire. As these two factors would be an indicator of their socioeconomic status. They also assembled information on exposure to traffic-related pollution and whether the children had been exposed to tobacco smoke during pregnancy.

“We found that it was children exposed to the combination of air pollution and life in a stressful environment who were at highest risk of developing asthma,” says chief investigator Rob McConnell, professor of preventive medicine at the Keck School of Medicine of USC and deputy director of the Children’s Environmental Health Center at USC.

The findings of the survey revealed that parental stress was not alone capable of increasing the risk that children would develop asthma. However, when children had a combination of parents with stressful lives and also lived near high levels of traffic-related pollution, their risk of asthma increased in contrast to children who were only exposed to pollution.

McConnell further stated that, “Air pollution can promote inflammatory responses in the airways of the lung, which is a central feature of asthma. Stress may also have pro-inflammatory effects and this may help explain why the two exposures together were important.”

“Childhood asthma is a complex disease that probably has many contributing causes. Further study of effects of exposure to air pollution in combination with stressful environments associated with poverty and other social factors could contribute to our understanding of why the disease develops,” elucidates McConnell.

The findings of the study revealed that the risk of asthma associated with traffic-related pollution was considerably higher in contrast to children of parents who reported higher stress levels. Apparently, stress along with poor parental education was associated with larger results of contact to tobacco smoke during pregnancy.

Experts stated that children whose parents viewed their lives as unpredictable, unmanageable seem to be more prone to the effects of pollution. Allegedly, stress related to poverty may assist in elucidating as to why asthma rates are often higher in lower socioeconomic status communities.

This study will soon be published in the online early edition of the Proceedings of the National Academy of Sciences.