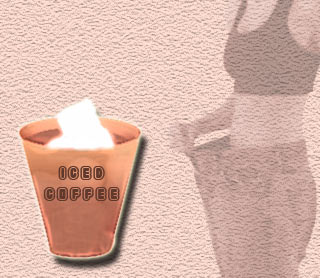 Going for your daily cup of iced coffee may be a ritual that you look forward to everyday. But it seems that this lip smacking beverage may contain one fourth of a woman’s recommended daily calories. Consumption of this high calorie drink could also potentially increase one’s cancer risk. This revelation was made by the experts from World Cancer Research Fund (WCRF).

It was stated that a daily approximate calorie requirement for an average woman may be around 2,000 calories. Now, the experts from WCRF have discovered that an iced coffee drink may contain approximately 561 calories; which covers a quarter of a woman’s recommended daily calorie intake. Some iced coffee drinks were found to contain over 200 calories, where some were even found to contain more than 450 calories.

For this purpose, WCRF has notably warned people that the regular consumption of such high calorie and sugary drinks could increase their risk of developing cancer. This potential association has been explained by saying that high calorie intake can lead to weight gain which may play a role in increasing one’s cancer risk. More so, scientists were also noted to have reported that second to avoiding smoking, maintaining one’s weight may be the most crucial step taken in preventing cancer.

“The fact that there is an iced coffee on the market with over a quarter of a woman’s daily calorie allowance is alarming. This is the amount of calories you might expect to have in an evening meal, not in a drink,” says Dr. Rachel Thompson, Science Programme Manager for WCRF. “Having these type of drinks as an occasional treat is unlikely to do you any harm. But if you are having them regularly then they will increase the chances of you becoming overweight, which in turn increases your risk of developing cancer, as well as other diseases such as heart disease and diabetes.”

“With even some small options containing 300 calories, people should check the nutritional content of these drinks, particularly if they are having them regularly. There are some iced coffees on the market that are low in calories, so it is worth shopping around. For example we found one that has just three calories,” continues Dr. Thompson. “As a general rule, if you want to have a coffee, go for an unsweetened version with skimmed or semi skimmed milk as this is likely to contain fewer calories. It is also worth steering clear of ones that contain lots of cream or sugary fruit syrups as these tend to be higher in calories.”

The experts from WCRF were noted to have recommended people to try and stay lean without being underweight, for the purpose of preventing cancer development. Apart from this, they were even noted to have suggested people to stay away from drinking sugary drinks and reducing their intake of energy-dense foods.

Further it was also stated that drinking water may be the best alternative beverage to sugary high calorie drinks. Apart from this, consuming other drinks like unsweetened tea and coffee minus any cream, were even believed to be more preferred than the intake of sugary and high calorie drinks.