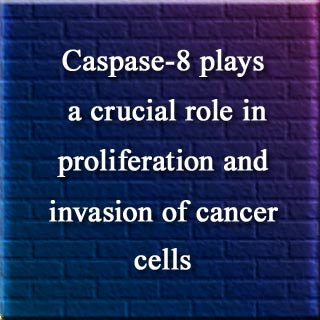 Scientists at Burnham Institute for Medical Research have discovered that the Caspase-8 protein seems to assist in relaying signals which may cause cancer cells to proliferate, migrate and destroy neighboring tissues. Since long, Caspase-8 protein was known to play a significant role in promoting planned cell death which is also called as apoptosis.

Cancer is believed to result from excessive cell division and reduced cell death. A number of cell death proteins appear to be missing from human tumors, which allows the cancer cells to overlook the signs that keep a check on their growth. Cells that can avoid apoptosis seem to have a clear growth advantage.

Professor and director of the Cancer Center at Burnham, Kristiina Vuori, M.D., and Ph.D. along with the other scientists demonstrated that Caspase-8 may perhaps have caused neuroblastoma cancer cells to proliferate and migrate. Supposedly for the first time, Caspase-8 was revealed to have played a key role in relaying the growth signals from epidermal growth factor (EGF) which cause cell division and invasion.

The researchers also recognized an RXDLL amino acid pattern which seems to manage the signaling from the EGF receptor through the protein kinase Src to the master cell production regulator protein called as MAPK. Src is a protein which is known to be involved in cancer cell proliferation. Apparently, this same signaling pathway stimulates neuroblastoma cells to migrate and invade neighboring tissues. This appears to be a vital process in cancer metastasis.

“Caspase-8 has a well defined role in promoting apoptosis, especially in response to activation of the so-called death receptors on the outside of cells. Although Caspase-8 is involved in apoptosis, it is rarely deleted or silenced in tumors, suggesting that it was giving cancer cells a leg up in some other way. Our studies suggest that Caspase-8 does so by activating the MAPK pathway through Src,” says Darren Finlay, Ph.D., lead author of the study.

For the purpose of the study, scientists used immuno-blot assays and explained that EGF signaling appears to be absent in a cancer cell line that is deficient in Caspase-8. Allegedly, EGF signaling could be restored by reconstituting the cells with wildtype Caspase-8. A series of correlated studies seem to have helped in identifying a RXDLL pattern in the protein. Purportedly, this series was revealed in other proteins in order to function in cell signaling.

They also used immune-blot assays in order to demonstrate that reconstituting the Caspase-8 deficient cells with Caspase-8 with mutations in the RXDLL domain may perhaps not result in EGF signaling. Supposedly, this implies that Caspase-8 mediates signaling through the RXDLL domain.

The study was believed to have presented a detail understanding of the molecular mechanisms which were involved in cancer cell proliferation and migration. Thus the findings of the study stated that Caspase-8 appears to be a novel therapeutic intervention point which could be used in treating multiple types of human cancers.

This study has been published in the journal Cancer Research.

Obese esophageal cancer patients may be at high risk of death...