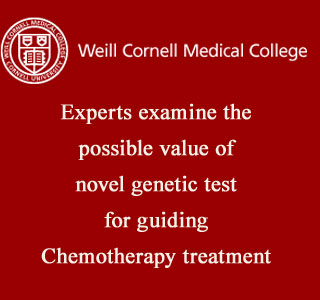 A latest study reveals the so-called pretreatment pharmacogenetic testing seems to be beneficial only when the dose-reduced treatment appears to be effective, similar to the full dose. This novel study was known to have been led by scientists at Weil Cornell Medical College.

As long as the dose is useful, the test may be able to prevent several cases of severe neutropenia. In neutropenia, a fundamental type of white blood cells known as neutrophils is believed to go low unusually. Supposedly, this would signify better life expectancy and lower cost of care.

Approximately, 29,000 patients in the United States seem to suffer from metastatic colorectal cancer. It has been revealed that chemotherapy along with irinotecan is a regular treatment in order to improve their survival. However, nearly one in ten of these patients showed a variation in their DNA.

This variation was believed to signify that this treatment could result in a severe reduction in their white blood cell count. Eventually, the patients may be highly susceptible to bacterial infection and possibly lead to death. The novel genetic test seems to have recognized patients with the variation in order to lower the treatment dose. However, it appears to have been unclear if the testing is meaningful.

“Pharmacogenetic testing is a relatively new treatment innovation that may prove to be a valuable tool for clinicians as they develop personalized treatments for cancer patients to minimize side effects while maintaining outcomes. Our study points to significant potential benefits for pretreatment pharmacogenetic testing for metastatic colorectal cancer, but remains to be verified by clinical research,” says lead author Dr. Heather Taffet Gold, assistant professor in the Division of Health Policy in the Department of Public Health at Weill Cornell Medical College.

For the purpose of the study, experts utilized a computer simulation model. Evidently, this model followed the supposed patients who were treated with the FOLFIRI (5-fluorouracil/leucovorin with irinotecan) chemotherapy regimen for metastatic colorectal cancer. The model assumed that under normal care, patients seem to have received a complete dose of irinotecan.

Dr. Bruce Schackman, senior author of the study, associate professor of public health and chief of the Division of Health Policy in the Department of Public Health at Weill Cornell Medical College, stated that, “Cost-effectiveness evaluations of pharmacogenetic tests can provide important insights into both the clinical and economic value of these new treatment paradigms, but few of these types of studies have been conducted. Importantly, these studies also allow us to define in economic terms the value of additional comparative effectiveness research. In this case, we’ve determined that further research of up to $22 million should be conducted to study the risks and benefits of dose reductions based on the results of the genetic test.”

“This study is an important example of how the combined use of cost-effectiveness analysis and pharmacogenetic testing can improve treatment outcomes. Both methods are becoming increasingly integral to the advancement of evidence-based medicine,” says Dr. Alvin I. Mushlin, Professor and Chairman of the Weill Cornell Department of Public Health.

The findings of the study revealed that through genetic testing, irinotecan dose seems to have been reduced by nearly 25 percent in individuals who had the UGT1A1*28 variant allele. In order to minimize cases of neutropenia, the dose reduction was noted to have been specified by the Food and Drug Administration.

This study has been published online in the journal Cancer.