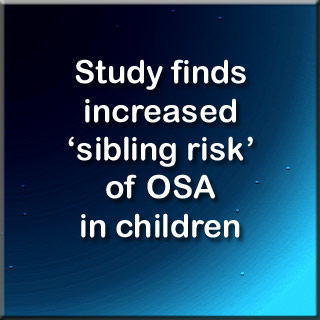 According to a latest study, children seem to have an increased risk of developing obstructive sleep apnea (OSA) if they have at least one sibling who has been detected with the sleep disorder. At least that’s what experts from the organization of American Academy of Sleep Medicine have to say.

Allegedly, OSA occurs when soft tissue in the back of the throat breaks down and blocks the airway during sleep. Majority of the children with OSA were observed to have a history of snoring which seems to be loud and may include clear pauses in breathing and gasps for breath. Also, parents time and again have observed that the child seems to have been working hard in order to breathe during sleep.

The American Academy of Sleep Medicine (AASM) stated that other healthy children may perhaps have about two percent of chances of developing OSA.

Early involvement could assist in preventing the possibility of severe consequences of OSA in children, states Chief investigator Danielle Friberg, MD, senior surgeon in the ENT department at Karolinska Institute in Stockholm, Sweden.

“Early diagnosis and treatment is important to avoid complications such as learning difficulties, ‘failure to thrive,’ serious cardiovascular complications and even death,” elucidates Friberg.

For the purpose of the study, experts assembled siblings born between the year 1978 and 1986. They also collected data of all children in Sweden i.e. 2.7 million individuals during the follow-up study period during 1997 and 2004. Children of about 18 years of age and younger were believed to have been divided into sibling groups. Supposedly, the existence or lack of a primary hospital diagnosis of pediatric OSA during the follow-up period was recognized for each individual.

Based on the occurrence of the disorder in at least one of the childrens’ siblings, they seemed to have been classified as positive or negative for sibling OSA. Apparently, experts calculated the rate of frequency with the help of standardized incidence ratios along with 95 percent confidence intervals. Reference groups were observed to have been boys and girls with nearly two or more unaffected siblings.

In addition, experts seemed to have inspected the sibling risk of adenotonsillar hypertrophy, which is known to be a major risk factor for pediatric OSA. It was estimated that a total of 13,656 boys and 11,648 girls had the earliest hospital diagnosis of hypertrophy of the tonsils, or hypertrophy of the adenoids and tonsils.

The findings of the study revealed that the general standardized incidence ratios for adenotonsillar hypertrophy among those who appear to have at least one affected sibling were 4.53 for boys and 4.94 for girls. However this familial risk seems to be much lower as compared to the group with OSA. The authors claimed that the increase was highly significant as well as the numbers of children seem to be more in contrast to the OSA group.

The findings also indicated that after accounting for age, socioeconomic status and geographic region, the sibling risk of pediatric OSA appears to be exceptionally high, with a standardized incidence ratio of 33.2 in boys and 40.5 in girls who seem to have at least one sibling with an OSA diagnosis.

The authors were of the opinion that the increased risks for both OSA and adenotonsillar hypertrophy could be an expression of genetic or shared environmental mechanisms. Novel genetic studies of both adult and pediatric patients with OSA were believed to have signified that genetic mechanisms play an important role. However, the potential environmental factors include the increased medical awareness of sleep disordered breathing over time, both in parents as well as doctors.

The findings of the study have been published in the journal Sleep.