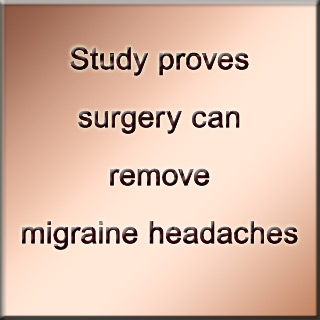 According to a latest study in Plastic and Reconstructive Surgery, there seems to be some hope for severe and frequent migraine sufferers who are unable to find relief from conventional remedies. Supposedly, this study is the official medical journal of the American Society of Plastic Surgeons (ASPS).

Migraine headaches are believed to cause exhaustion not only on the estimated 30 million Americans who suffer from them, but also on the economy. Apparently, migraine headaches cause a lot of pain and its other symptoms are very severe, because of which approximately $13 billion is spent every year in treating the headache. In addition, people find it difficult to loose the time lost from work.

“Nearly one out of four households, including 18 percent of women, suffers from migraines and many patients are not only eager, but desperate to stop the pain. In this study, we’ve shown that surgical treatment of migraine headaches is safe, effective, and that this reasonably short operation can have a colossal impact on the patients’ quality of life – all while eliminating signs of aging for some patients, too,” says study author and ASPS Member Surgeon and Bahman Guyuron, MD, professor and chairman, department of plastic surgery, University Hospitals Case Medical Center.

Since the past ten years, experts were believed to have been examining the theory that migraines occur when a person’s trigeminal nerve branches appear to be irritated. Allegedly, when the muscles around these branches are injured, the headaches ends, which is why some patients seem to have found relief from the ‘freezing’ effect of Botox treatments. However, latest study claimed that removal of these muscles or ‘triggers,’ presents an easily achievable and permanent fix.

For the purpose of the study, experts seemed to have carried out a test with the help of placebo controlled clinical trial. Firstly, they recognized the three most widespread trigger sites. They then at random, gave 75 patients to either the actual i.e. 49 patients or sham-surgery groups i.e. 26 patients. Evidently, patients were then provided with questionnaires and after they completed, they underwent either a real or perceived deactivation operation. This operation was supposedly based on their major migraine trigger site. It was seen that for most patients, it seemed to be similar with the traditional forehead lift. Experts were noted to be from Case Western Reserve University and University Hospitals Case Medical Center in Cleveland.

Dr. Guyuron further stated that, “Though one might not think to look to plastic surgeons to treat migraines, we are commonly involved in peripheral nerve surgery and treat nerve- related pain, so this is a meaningful addition to the field of reconstructive plastic surgery. And I can say that these procedures are the most rewarding for me, because these are the patients that come back and report that their lives have been changed.”

Also, there seem to be a high occurrence of symptom improvement in the sham surgery group which may perhaps be attributed to the placebo effect. Experts pointed out that the difference in the development of migraine and elimination stated by the two groups seems to be statistically significant.