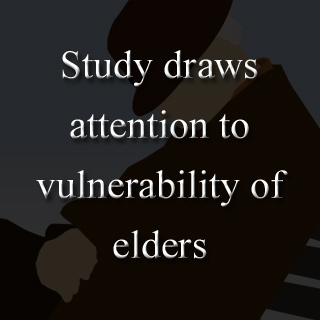 According to a latest study, older adults who suffer from abuse or self-neglect seem to undergo a greater risk of early death in comparison to other seniors. This study was carried out by the experts from Rush University Medical Center.

It is estimated that there are approximately 2 million cases of elder abuse and self-neglect in the United States each year. In addition, it was believed that, elders who are physically or cognitively fit face a higher risk of death from abuse or self-neglect.

Lead author of the study and a researcher and geriatrician at Rush University Medical Center, Dr XinQi Dong claimed that elder abuse and self-neglect appear to be severe, widespread and under-recognized public health issues.

“Our findings demonstrate the dire health consequences for these vulnerable older adults. Health care professionals and others who serve the elderly need to identify and report suspected cases of abuse or self-neglect early and act quickly to ameliorate the problems,” says Dr Dong.

For the purpose of the study, experts examined nearly 9,318 individuals who were 65 years of age and older. Also, the individuals seemed to have registered themselves in the Chicago Health and Aging Project, between 1993 and 2005. Apparently, this project was a longitudinal epidemiological study of a community-dwelling population. Experts conducted personal interviews in order to evaluate the participants’ health history, physical function, cognitive function, health behaviors and psychosocial factors.

The study also found that increased mortality appears to be significant for older adults who underwent abuse or self-neglect inspite of their level of physical or cognitive function; except the group which included abused elders with the highest level of functioning. Experts discovered that these individuals perhaps seem to have added insights into the dangers of the abusive behaviors. Supposedly, they were more likely to ask for assistance, or were capable enough to modify the relationship with the doer. Thus they seem to be able to escape the threats to their safety and well-being.

In order to evaluate the alternative explanations for the increased risk of premature dying, experts were believed to have considered various factors like differences in sociodemographic characteristics, medical conditions, health habits, cognitive function, physical function, depression and social networks. However, none of these factors considerably altered the findings.

Dong further stated that, “With the rapidly growing aged population in this country, problems of elder abuse will likely become even more pervasive, affecting our family, friends and loved ones. We hope our study will stimulate more discussion about these problems and help advocate for additional research and resources, as well as national policy initiatives, to improve the health and well-being of this vulnerable population.”

Dong was of the opinion that elder abuse seems to have lagged more than two decades behind that of child abuse or intimate partner violence.