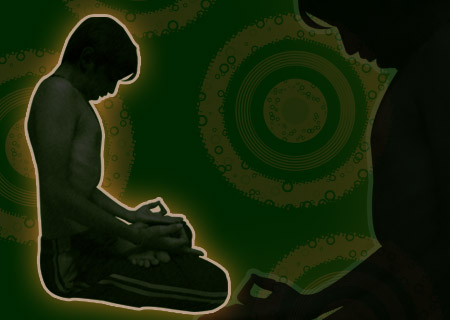 In the Yogataravali Sutras it is said, “Jalandhara bandha, uddiyana bandha and moola bandha are situated in the throat, abdomen and perineum respectively. If their duration can be increased then where is the fear of death? By the practice of these three bandhas, the dormant kundalini awakens and enters into the sushumna. The breath becomes still (kumbhaka). With the performance of these three bandhas, the rechaka (exhalation) and pooraka (inhalation) ceases to function. With this the senses become purified and kevala (enlightenment) takes place. I pray for that vidya (knowledge) residing in Kevala kumbhaka.” (YS, 5, 6, 8 )

The word bandha (which should not be confused with the words bandh, bandha and bandhana, which have similar meanings) may be defined in several ways. A Sanskrit dictionary definition runs as follows: “binding, tying a bond, tie, chain, fetter, a ligature, to catch, hold captive, arrest, imprison, fix, fasten, hold back, restrain, stop, shut, close, to redirect, check, obstruct, clot and lock.”

Bandha may also be defined analogously and is likened to the “damming of a river”, “building a bridge” or “building over the sea.” This can be interpreted as meaning that, a bandha is a vehicle to traverse the ocean of samsara (worldly existence) and reach the other shore of enlightenment.

The bandha group consists of moola, uddiyana and jalandhara bandhas. The fourth, maha bandha, is a combination of these three. How is it that a group of only four practices is considered equal to or of greater importance than the hundreds of asana, pranayama and mudra practices and their variations? Traditionally, the fact that the spiritual aspirant was introduced to bandhas secretly and only after he had mastered the execution of many, often complex, asanas, pranayamas and mudras shows that the practice of bandhas was highly respected by yogic practitioners.

Seen physically, moola bandha is the conscious, willful contraction of the perineum or cervix, uddiyana bandha of the solar plexus and jalandhara bandha of the throat.

In most modern yogic literature, bandha is defined simply as a “lock.” However, the true meaning of bandha is essentially paradoxical, for it is said that by locking or contracting certain muscles on the physical level a subtle process of “unlocking” goes on simultaneously on the mental and pranic levels. Most modern muscle relaxation therapies advocate that by the total, systematic contraction and relaxation of muscles all over the body, one regains complete physical and mental relaxation. The underlying rationale of such a theory is that in order to remove physical and mental tension it is more effective to first learn to exaggerate the tension already existing in the body by willfully and selectively contracting all of its muscles.

Bandhas work in a similar way, simultaneously affecting the physical, pranic, mental, psychic and causal bodies. They have far reaching effects because they are associated with energy centers in the spine and brain. Therefore, bandhas are more dynamic, explosive and immediate in effect than simple contractions of muscles in the arms or legs.

Bandhas involve the contraction or squeezing of muscles. As there are three bandhas, there are three main muscle groups involved: the perineal muscles, the abdominal muscles and the cervical (neck) muscles. Contraction of these muscles affects the nervous, circulatory, respiratory, endocrine and energy systems. When a muscle is contracted a nerve impulse is relayed to the brain, triggering other neuronal circuits and nervous centers. This in turn affects our state of consciousness. In response to this stimulation, the brain adjusts its firing patterns. For example:

1. Moola Bandha (perineal contraction) stimulates both the sensory-motor and the autonomic nervous system in the pelvic region. When moola bandha is performed, pelvic stimulation activates parasympathetic fibers merging from the pelvic spinal cord. Parasympathetic fibers emerge from the cervical (neck) and sacral (pelvic) area only, while sympathetic fibers emerge from the thoracic (upper back) and lumbar (lower back) areas. The performance of bandhas has been experimentally shown to enforce all parasympathetic activities in the body which includes a decrease in heart rate, respiration and blood pressure (only in a person with normal blood pressure), and a general sense of rest and relaxation. Sympathetic nervous stimulation also occurs in moola bandha but at a subdued level. The overall effect of stimulating both parasympathetic and sympathetic nervous system is to re-balance these two major components of the nervous activity in the body. This has a very definite repercussion on the hypothalamus (responsible for the complete endocrine system), which relays its information to the whole limbic (emotional) system and the cerebral cortex (outer layer of the brain).

2. Uddiyana bandha (abdominal contraction) compresses the digestive organs, adrenal glands, kidneys, and most importantly the solar plexus. This “brain-in-the-stomach” is squeezed and in return a flood of energy is generated in the abdomen and chest. The energy has healing qualities and is experienced consciously as beneficial, enhancing our sense of well-being. Uddiyana bandha tones the sympathetic nervous system, encouraging it to work more efficiently. It also enables us to gain control over the sympathetic nervous system so that it does not function in unsuitable situations, thus avoiding the effects of stress and anxiety in psychosomatic disease.

3. Jalandhara bandha (throat compression) stretches the neck, pulling the spinal cord and thus the brain. This has subtle effects on the pituitary and pineal glands while the forward flexion (in jalandhara bandha the chin is placed on the chest) affects the thyroid, parathyroid and thymus glands. At the same time it stimulates the parasympathetic spinal area in the medulla oblongata (situated at the bottom of the brain and the top of the spinal cord) regulating heart rate, respiration, blood pressure, etc. Finally, jalandhara bandha also compresses the carotid sinuses which help in lowering the blood pressure. By reducing sympathetic tone, one achieves a sense of rest, relaxation and general well-being.

The performance of bandhas leads to a general massaging effect of the muscles and internal organs. Increased blood supply to these areas aids in a general purification of the body. Bandhas affect the endocrine glands. As these glands are intimately related to the chakras, it is a natural consequence that the bandhas also affect the chakras. When stimulated, the chakras influence every aspect of the organism, revitalizing it with life-sustaining energy.

The performance of bandhas in conjunction with pranayama (breath and energy control) affects the whole body:

As a result of the direct effect that the bandhas have on the endocrine glands, certain bio-rhythms in the body are also regulated. For example, both moola bandha and uddiyana bandha are extremely useful in stabilizing menstrual periods.

Each bandha is associated with the stimulation of a specific focus of prana. Bandhas are said to be mutually related to certain nerve plexus in the spine, the endocrine glands; as well as pranic energy centers known as chakras. For each nerve plexus and endocrine gland on the physical level there exists a corresponding chakra on the pranic level as follows: mooladhara – sacral/ coccygeal plexus; swadhisthana – prostatic plexus; manipura – solar plexus; anahata – cardiac plexus; vishuddhi – pharyngeal/ laryngeal plexus; for ajna and sahasrara, the pineal/ pituitary/ hypothalamic complex. Of the six chakras in the spine, the bandhas are directly associated with the active stimulation of three chakras as follows: moola bandha, mooladhara chakra; uddiyana bandha, manipura chakra; jalandhara bandha, vishuddhi chakra. Each of these physical and pranic locations are related, neurologically, to a specific counterpart in the spinal cord and brain, and therefore the psyche. Contraction at the physical level activates and awakens hitherto dormant faculties in the brain and mind, usually present in only the most evolved mind. Mastery of the bandhas, therefore, leads to the fullest realization of our potential.

The physical, endocrinological and neurological aspects of bandhas can be understood when we appreciate the fact that the body is a complex yet well organized field of various energy systems, based on one fundamental energy principle called prana. Though they have vast physical repercussions of a positive nature, their main effect is on the body’s energy systems at the pranic level.

According to many esoteric philosophies the downward flow of prana (apana) represents the part which leads man’s consciousness to the lower, earthier elements: for e.g. satisfaction of instinctual desire, over-indulgence, lethargy, apathy, laziness and so on. According to these philosophies, it is believed that man’s essential nature is Godlike and that in order to re-unite or realize the “first cause” he must re-direct his consciousness. Here the role of bandhas, and especially moola bandha, is to block the descending movement of consciousness and re-direct it upwards.

A useful analogy to aid our understanding of bandhas is to liken them to the locking, stopping, obstructing and re-directing power of a dam wall. Energy (physical mental and psychic) is centralized and focused at the site of contraction so that it can be re-directed for useful work as desired by the controller. These areas are infused with a fresh, vital force capable of checking imbalances in the body systems.

To further understand bandhas we must extend our view so as to see them not only as locks, but also as removers of locks, or blockages, in the form of physical and mental impurities. According to the scriptures there are granthis of psychic knots, located at mooladhara, anahat and ajna chakras. Granthis represent blockages in man’s awareness of himself at the different levels of consciousness; they obscure the true image of man’s essential nature. Traditionally, bandhas were prescribed as one of the most effective means of untying these knots or blockages, existing as tension, anxieties, repressions and unresolved conflicts, thereby allowing us to re-discover our true nature.

The force generated from the bandhas may be likened to that of increased pressure in a tube. Imagine a piece of tubing resting vertically to the ground. This tube represents sushumna nadi (the main pranic energy channel which runs up the spine).

Moola bandha represents the sealing of the lowest portion of the tube, thus preventing the downward motion of prana. It stimulates energy in mooladhara, awakening kundalini shakti.

Jalandhara bandha seals off the top portion of the tube. Prana is now locked within this tube.

Thus, when maha bandha is performed, prana is compressed in sushumna. The locks prevent its downward and upward movement at the same time stimulating energy. Release of the bandhas flushes prana through the whole body, and as prana is by nature vital, life-giving energy, the body is relaxed, toned and rejuvenated. The granthis can then be pierced and untied, expanding consciousness.