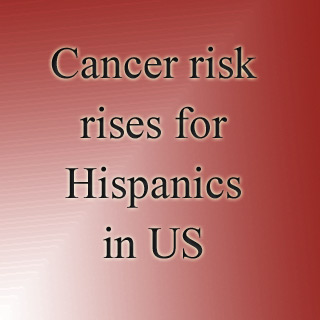 According to a latest study, diverse Hispanic population groups seem to have higher occurrence rates of certain cancers. Also, they appear to have worse cancer effects if they live in the United States, in contrast to living in their homelands. At least that’s what the American Association for Cancer Research has to say.

Supposedly, till today, studies have categorized all Hispanics under the same umbrella, as a single ethnic group thereby covering the differences between each population group. It was estimated that when all cancers were taken as a whole, risk for most cancers was higher by at least 40 percent among Hispanics living in the United States in contrast to those who live in their homelands.

“Hispanics are not all the same with regard to their cancer experience. Targeted interventions for cancer prevention and control should take into account the specificity of each Hispanic subgroup: Cubans, Puerto Ricans or Mexicans,” says lead author, Paulo S. Pinheiro, M.D., Ph.D., M.Sc., researcher in the Department of Epidemiology at the University of Miami Miller School of Medicine.

“They are really heterogeneous from cultural and socioeconomic perspectives and represent several population groups,” states Amelie G. Ramirez, Dr.P.H. director of the Institute for Health Promotion Research, and co-associate director of the Cancer Prevention and Population Studies research program.

Ramirez claimed that the Hispanic population in the United States seems to be increasing considerably. Approximately one in every three people may possibly be Hispanic by 2050.

Pinheiro along with his colleagues were noted to have evaluated the kinds of cancers occurring in each Hispanic population group. Also, they compared the risk factors of later moving to the United States. They then conducted the study in Florida, which is known to have a diverse Hispanic community composed of Cubans, Mexicans, Puerto Ricans, Central and South Americans.

The findings of the study revealed that these population groups illustrated different patterns of cancer once they settled in the United States. Apparently, Mexicans had the lowest rates of cancer overall whereas Puerto Ricans had the highest rates of cancer. It was apparently seen that Cubans’ risk of cancer most strongly resembled that of non-Hispanic whites. Similar to the U.S. non-Hispanic white population, Cubans and Puerto Ricans may possibly acquire higher risk for diet-related cancers relatively fast.

Colorectal cancer risk among Cubans and Mexicans who moved to the United States seemed to have been more than twice that in Cuba and Mexico. Similar findings revealed that lung cancer among Mexican and Puerto Rican Floridian women who moved to the US were more as compared to those in Mexico or Puerto Rico.

Pinheiro further stated that, “This suggests that changes in their environment and lifestyles make them more prone to develop cancer. It is puzzling that the groups for which integration in mainstream American society is easier, including access to health care, are also those with higher cancer rates even after accounting for the increased detection of certain cancers in the United States.”

Pinheiro and Ramirez were of the opinion that patients should be well aware of some of the positive aspects of their original lifestyles. Also, they should be strongly discouraged from adopting unfavorable lifestyles which may be common in the US. These include unhealthy diets, smoking and alcohol use.

The findings of the study present significant opportunities for United States and international alliances in the unit of prevention, treatment and research of cancer. Ramirez claimed that though physicians may not require to modify the care they provide, they should be aware of the diversity and differences in cancer prevalence among this population.

Experts reveal that further studies need to be carried out in order to evaluate the variations in cancer risk depending on their socio-economic status and the amount of time spent in the US within every Hispanic population group. This would determine their habits which may influence their susceptibility to certain cancers.

The findings have been published in the journal of the American Association for Cancer Research called as Cancer Epidemiology, Biomarkers & Prevention.