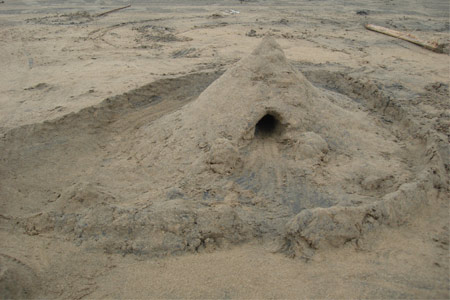 Don’t we all remember our mothers running after us to wash our hands before we eat anything? It looks like there is more into this than simply your mum’s care especially if you happened to spend a day at the beach. A novel study unfolds that washing your hands after digging into sand at the beach could considerably reduce the chances of ingesting bacteria, thus preventing you from falling sick.

These new findings unravel the association between digging into sand and stomach-aches. If experts associated with this analysis are to be believed then rinsing the hands after handling sand at the beach could be effective in lowering the exposure to microbes. Beach sand is claimed to be a potential source of bacteria and viruses, thus by washing their hands individuals can lower their risks of gastrointestinal illnesses.

“Our mothers were right! Cleaning our hands before eating really works, especially after handling sand at the beach,” shares Dr. Richard Whitman, the lead author of the U.S. Geological Survey (USGS) study. “Simply rinsing hands may help reduce risk, but a good scrubbing is the best way to avoid illness.”

As part of this study, experts sized up the number of E. coli bacteria that could possibly be transferred to people’s hands when they dug in sand. They examined sand from the shores of Lake Michigan in Chicago and took help of past findings based on illness rates.

An added laboratory experiment by the USGS scientists ascertained that by simply submerging their hands four times in clean water, individuals could remove more than 99% of the E. coli and associated viruses from the hands. The scientists in the recent years have further uncovered that the levels of E. coli bacteria in beach sand often seem to be much higher than that found in beach water.

A follow-up analysis at beaches around the nation by numerable experts claims to have revealed similar findings. The amount of bacteria in sand however was found to differ on various beaches. Beach water is monitored for E. coli as per the guidelines of the Beaches Environmental Assessment and Coastal Health Act (BEACH Act 2000). Sand at the beach although is presently not monitored for contamination.

In addition to this, seven beaches across the nation were also analyzed by the University of North Carolina-Chapel Hill and the U.S. Environmental Protection Agency recently. The investigations revealed that there were high chances of beachgoers who dig in sand developing gastrointestinal illness after a day at the beach as against those not digging in sand. Reportedly, individuals who partially covered themselves in sand had even stronger links with these illnesses. After spending a day at the beach, children were also more likely to develop gastrointestinal illness. This was mainly because they played in the sand more often and were more likely to get sand in their mouths.

“The excess illnesses we observed among those exposed to sand generally consisted of mild gastrointestinal symptoms, but it is a good idea to be sure to wash your hands or use hand sanitizer after digging or playing in the sand,” mentioned Chris Heaney, lead author of the UNC study.

An indicator of recent sewage contamination, E. coli if present also increases the chances of pathogens harmful to human health. While the origin of these bacteria is frequently unknown, they can possibly carry throughout the swimming season. Thus they could stay as a potential contamination source to beach visitors.

With the associated risk of playing in beach sand, this novel study brings to the light the need to strengthen efforts that determine the sources of microbial contamination on beaches.