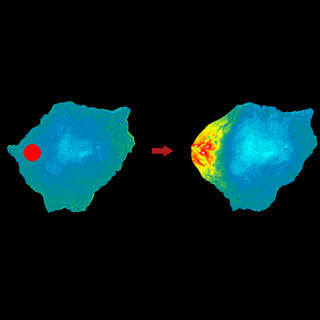 One of the biggest challenges in scientists’ mission to develop novel and improved treatments for cancer seems to be achieving a better understanding of how and why cancer spreads. Latest breakthroughs are believed to have revealed how diverse cellular proteins are turned ‘on’ or ‘off’ at the molecular level. However, a large amount continues to be understood about how protein signaling appears to influence cell behavior.

Apparently, this technique is known to provide a new tool for scientists who study the essentials of protein function. Klaus Hahn, Ph.D. along with his colleagues has developed a novel technique which seems to utilize light in order to control the activity of a protein at specific times and places inside a living cell.

Thurman Professor of Pharmacology at the University of North Carolina at Chapel Hill and a member of UNC Lineberger Comprehensive Cancer Center, Hahn was noted to have described the technique. Supposedly, this technique makes use of light in order to control protein behavior in cells and animals merely by shining light on the cells where they would like the protein to be active.

Hahn stated that, “The technology has exciting applications in basic research – in many cases the same protein can be either cancer-producing or beneficial, depending on where in a cell it is activated. Now researchers can control where that happens and study this heretofore inaccessible level of cellular control.”

He further added that, “Because we first tested this new technology on a protein that initiates cell movement, we can now use light to control where and how cells move. This is quite valuable in studies where cell movement is the focus of the research, including embryonic development, nerve regeneration and cancer metastasis.”

Allegedly, this novel technology is a progress over previous light-directed methods of cellular control. Previous methods seemed to have used toxic wavelengths of life, disrupted the cell membrane or could perhaps switch proteins ‘on’ but not ‘off’.

This research in Hahn’s lab was carried out by Yi Wu, Ph.D., research assistant professor of pharmacology, in association with a team led by Brian Kuhlman, Ph.D., associate professor of biochemistry and biophysics at UNC and a team led by Ilme Schlichting, Ph.D. at the Max Planck Institute for Medical Research in Heidelberg, Germany.

The findings of the research have been published in the journal Nature.