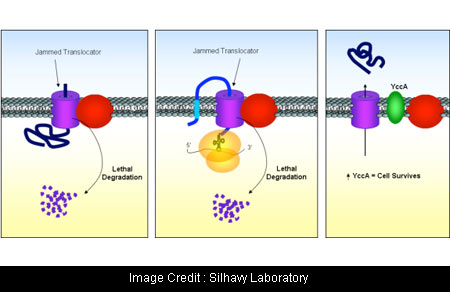 The latest study from Princeton University seems to have found why particular types of antibiotics are so effective. Experts studied the complicated method at work in protein production. They have apparently also discovered as how death of a cell is protected by a particular protein which threw light on a natural cancer-fighting process.

Thomas Silhavy, Princeton’s Warner-Lambert Parke-Davis Professor of Molecular Biology, and Johna van Stelten, a graduate student, working with two Swiss experts discovered as to how some antibiotics like tetracycline and chloramphenicol, which are in common use for 50years can be so fatal against particular strains of bacteria.

Silhavy and van Stelten had been learning the system by which proteins from antibodies to hormones are formed in bacteria’s cytoplasm which is the sticky substance that makes up the interior of the cell and then transferred as to where they are necessary. Through microscopic tubes called as translocators the spaghetti-like proteins supposedly departs the bacteria’s cytoplasm. The translocator apparently gets wedged as sometimes the proteins fold up unintentionally.

Silhavy commented “Proteins go through the translocator, like a piece of spaghetti through a hole. But if you can imagine if you were to tie knots in the spaghetti, it wouldn’t be able to get through; it gets stuck.”

As per Silhavy and Van Stelten, the first to monitor the event mentioned that the jammed translocator is supposedly actually attacked by the bacterial cell thus decimating it. The study experts speculated as to what might occur in a more complex situation like if the antibiotics were introduced into the cell cytoplasm to deliberately put a stop to bacteria.

The scientists discovered that antibiotics like tetracycline and chloramphenicol cause the ribosomes. They are a cell’s protein-producing machines and it is used to halt halfway through the procedure of making proteins. Due to this partially constructed proteins are stuck to the ribosome. This squeezes the translocator in the bacteria.

Silhavy commented “This is very similar to plugging the translocator with a folded protein and, sure enough, this also causes translocator destruction. It’s like putting an anchor on the spaghetti instead of a knot. They are stuck and dead forever.”

Study experts had been puzzled as to why some of these antibodies seemed to be so proficient at destroying certain kinds of bacteria more swiftly than others. These experiments supplied the rationalization. The study claimed that the translocators are extremely important for life and if from the beginning some bacteria have fewer translocators then they are more susceptible to such an attack.

Stelten commented “While it has been known for many years that these antibiotics work by inhibiting bacterial protein synthesis, it was not clear why some bacteria in a population appeared more susceptible than others. Our work has identified a new reason why these antibiotics are lethal to bacteria that may help explain these earlier findings. If we are to have any hope of outpacing the antibiotic resistance obtained by bacteria, it is paramount that we fully understand the mechanism of action of the antibiotics we currently use. Unfortunately, this is often very difficult as evidenced by the fact that, 50 years on, we are still learning new things about them.”

These findings apparently could have significant inferences for medicine. This study led to another essential result. When the translocators in bacteria become wedged by wayward proteins, the experts examined that the translocators released a molecular signal. It is actually a stress response that in a destructive enzyme is called as FtsH protease. The FtsH protease cuts up the wedged translocators thus contributing to cell death under normal conditions.

The scientists discovered however that when they increased the quantity of YccA, a protein that is present in the bacterial cell, the translocators were protected from the FtsH attackers from YccA proteins. YccA is apparently quite alike to Baz Inhibitor – 1 (BI – 1), which the cancer researchers are interested in as cancer proliferates when it malfunctions.

This study was published in the August 7 edition of the Journal Science.