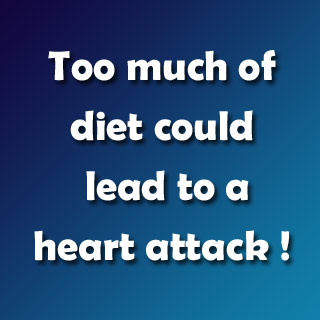 A low-carbohydrate or high-protein diets seems to assist individuals in losing weight quickly. However, very little information has been identified about the diets’ lasting effects on vascular health.

Presently, a latest study led by a scientific team at Beth Israel Deaconess Medical Center (BIDMC) appears to have presented some initial information on this topic. Experts revealed that when mice were placed on a 12-week low carbohydrate or high-protein diet, they seem to have showed a noteworthy increase in atherosclerosis. This condition is known to be a buildup of plaque in the heart’s arteries. Atherosclerosis is also known to be the chief cause of heart attack and stroke.

They discovered that the diet could perhaps lead to an impaired ability to form fresh blood vessels in tissues which were deprived of blood flow. This similar procedure might perhaps occur during a heart attack.

The findings of the study also revealed that standard markers of cardiovascular risk, including cholesterol, appears to have remain unchanged in the animals which were fed the low-carb diet, in spite of the apparent evidence of increased vascular disease.

Senior author Anthony Rosenzweig, MD, Director of Cardiovascular Research in BIDMC’s CardioVascular Institute and Professor of Medicine at Harvard Medical School stated that, “It’s very difficult to know in clinical studies how diets affect vascular health. We, therefore, tend to rely on easily measured serum markers [such as cholesterol], which have been surprisingly reassuring in individuals on low-carbohydrate/high-protein diets, who do typically lose weight. But our research suggests that, at least in animals, these diets could be having adverse cardiovascular effects that are not reflected in simple serum markers.”

Rosenzweig along with his coauthors discovered that the increase in plaque formation in the blood vessels and the impaired ability to form fresh vessels may have been associated with a reduction in vascular progenitor cells. On the other hand, other researchers were of the opinion that these vascular progenitor cells could perhaps play a protective role in maintaining cardiovascular health.

He further elucidated that, “A causal role for these cells has not yet been proven, but this new data is consistent with the idea that injurious stimuli may be counterbalanced by the body’s restorative capacity. This may be the mechanism behind the adverse vascular effects we found in mice that were fed the low-carb diets.”

The study’s first author Shi Yin Foo, MD, PhD, a clinical cardiologist in the Rosenzweig laboratory at BIDMC was noted to be the first person to go ahead with this investigation after examining heart-attack patients who were on these diets. He also observed Rosenzweig himself following a low-carbohydrate regimen.

In order to know what exactly happens inside the blood vessels, Rosenzweig advised Foo to perform an experiment on the mouse.

Foo further explained that, “We had a diet specially made that would mimic a typical low-carb diet. In order to keep the calorie count the same in all three diets, we had to substitute a nutrient to replace the carbohydrates. We decided to substitute protein because that is what people typically do when they are on these diets.”

The scientists then observed the mice nearly after six weeks, and again at 12 weeks. The results revealed that constant with experience in humans, the mice which were fed the low-carb diet appear to have gained about 28 percent less weight in contrast to the mice which were fed with the Western diet. However, further investigations discovered that the animals’ blood vessels appear to exhibit a considerably greater degree of atherosclerosis, as measured by plaque accumulation i.e. 15.3 percent as compared to 8.8 percent among the Western diet group. The results further showed that as estimated, the mice on the chow diet illustrated minimal evidence of atherosclerosis in contrast to the other two groups.

Foo said that, “Our next question was, ‘Why do the low-carb mice have such an increase in atherosclerosis?’.” In order to look for an explanation, she along with her coauthors proceeded to measure the usual markers which are believed to contribute to vascular disease. Apparently, the usual markers included the animals’ cholesterol and triglyceride levels, oxidative stress, insulin and glucose, as well as levels of some inflammatory cytokines.

“In each case, there was either no difference in measurements compared with the mice on the Western Diet [which contains the same amount of fat and cholesterol] or the numbers slightly favored the low-carb cohort. None of these results explained why the animals’ blood had more atherosclerotic blockages and looked so bad,” adds Foo.

During the experiment, the animals’ blood vessels were exposed to the harmful or inflammatory stimuli. Apparently, there wasn’t any difference which made Foo wonder whether the restorative capacity of the animals could possibly be contributing to the difference.

For this purpose, they were believed to have examined the animals’ endothelial or vascular progenitor cell (EPC) counts. These cells are known to have been derived from bone marrow. Supposedly, these EPC cells play a role in vessel regrowth and repair the injury that may follow.

Rosenzweig further claimed that the findings point out that there could possibly be a division between weight loss or serum markers and cardiovascular health. Furthermore, the cardiovascular health seems to be affected by macronutrients instead of protein and carbohydrates.

The findings of the study have been published in the online version of the Proceedings of the National Academy of Sciences (PNAS).