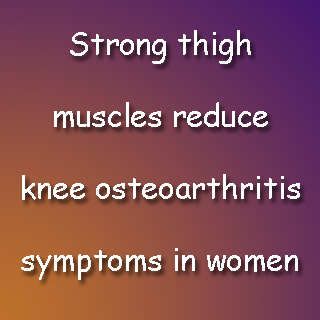 According to a novel research, thigh muscle strength may perhaps not predict the occurrence of knee osteoarthritis (OA) revealed in x-rays. However, it could possibly predict prevalence of painful or stiff knee OA. This research was put forth by experts from the University of Iowa Hospitals and Clinics.

Supposedly, women with the strongest quadriceps muscles appear to be protected against the development of knee OA symptoms. The knee is believed to be the most common weight-bearing joint affected by osteoarthritis. Osteoarthritis is also known as degenerative joint disease which seems to be a major cause of disability in the U.S.

The Centers for Disease Control and Prevention (CDC) estimated that approximately 26.9 million U.S. adults are affected by OA. In addition, 16% occurs in people aged 45+ years and takes place inside the knee. It was noted that nearly 8.7 % of symptomatic knee OA patients are female and 13.5% are male. A Medical Expenditure Panel Survey calculated that total out-of-pocket expenditures for treatment of arthritis could perhaps have been $32 billion in the year 2005.

Neil Segal, M.D., M.S., along with his colleagues examined nearly 3,026 men and women who were in the age group of 50-79 over a 30-month period in the Multicenter Knee Osteoarthritis Study (MOST). This analysis was performed in order to assess whether knee extensor strength could predict incident radiographic or symptomatic knee OA. OA was known to be determined through X-ray.

Experts evaluated the participants for thigh muscle strength with the help of an isokinetic dynamometer. An isokinetic dynamometer is known to be a device which measures the strength of different muscle groups. Also, the balance of muscle strength between quadriceps and hamstrings (H: Q ratio) was utilized in order to evaluate weakness in the lower extremity musculature. Experts were noted to take X-rays of the knees at the beginning of the study and at the end in order to determine the presence of OA.

A telephone screen at the onset and conclusion of the study was conducted in order to find if frequent pain, aching or stiffness seems to be present inside the knee. Furthermore, data on height, weight, femoral neck bone mineral density (BMD), and physical activity status was gathered from participants.

The findings of the study revealed that by the end of the study nearly 48 of 680 men and 93 of 937 women seem to have developed OA which was identified by x-ray. Apparently, at the end of the 30-month period 10.1% of women and 7.8% of men displayed signs of symptomatic knee OA.

The authors claimed that, “Our results showed thigh muscle strength was not a significant predictor of radiographic knee OA.”

“The H: Q ratios were not predictive of symptomatic knee OA in either men or women,” experts added.

Dr. Segal stated that, “Study of hip abductor strength, which is important for control of the knee joint, may be useful in a more comprehensive study of risk for OA of the knee. These findings suggest that targeted interventions to reduce risk for symptomatic knee OA could be directed toward increasing knee extensor strength.”

Experts acknowledged that there seems to be some limitation in the study as the evaluation of hip abductor strength were not included.

The findings of the study will be published in the journal, Arthritis Care & Research.