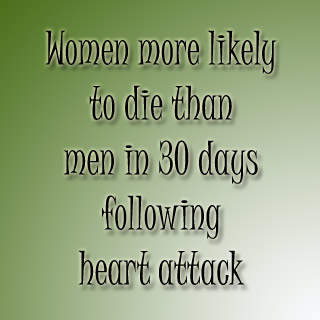 This is an interesting study that seems to concern the fairer sex. As per the latest study from the New York University School of Medicine, New York, it was discovered that following an acute coronary syndrome (ACS) such as heart attack or unstable angina, women may have a slightly higher risk of death than men in the following 30 days. But this distinction appears due to factors such as severity and type of ACS, clinical differences and angiographic severity and type of ACS.

According to the background information of the study, the authors mentioned “Cardiovascular disease is the leading cause of death in both men and women, accounting for one-third of all deaths. Although several studies have shown an improvement of prognosis in women over time, overall outcomes remain worse for women compared with men, providing a strong rationale for focusing on the study of sex-based differences in the outcome of acute coronary syndromes.”

Contradictory results are apparently found in the earlier analysis of the differences in outcomes for men and women following ACS.

The relationship between sex and 30-day mortality following ACS and analyzed factors such as clinical categorization at the time of ACS and the severity of angiographic disease was evaluated by Jeffrey S. Berger, M.D., M.S., of the New York University School of Medicine, New York. Between 1993 and 2006, patients of the study were enrolled from a sample of 11 independent, international, randomized ACS clinical trails.

Out of the 136,247 patients in this analysis, 38,048 that’s about 28 percent were women. 102,004 were patients of ST-segment elevation myocardial infarction(26 percent women); 14,466 patients were suffering with non-STEMI (29 percent women) and 19,777 patients suffering from unstable angina (40 percent women). Higher prevalence of hypertension, hyperlipidemia, diabetes and heart failure were apparently seen in women who were older. Higher occurrence of earlier heart attack and prior coronary artery bypass graft surgery were apparently seen in men who were more likely to be smokers.

Women had a seemingly higher unadjusted 30-day danger of death as opposed to men. 9.6 percent vs. 5.3 percent were discovered by the experts. No significant difference was apparently observed in 30-day mortality after multivariable adjustment for clinical characteristics and clinical presentation.

The authors commented “Perhaps the most striking findings in our analyses relate to the examination of mortality according to type of ACS. We found a significant interaction between sex and type of ACS, such that 30-day mortality risk among women was modestly higher than men only for those patients presenting with STEMI. In patients with NSTEMI and unstable angina, women had a lower adjusted 30-day mortality risk than men. In fact, the strongest finding after full adjustment was lower risk among women with unstable angina.”

The study experts also discovered that overall, women who went through catheterization had more tendencies to have nonobstructive coronary artery disease and lees likely to have multivessel disease as opposed to men. The relationship between sex and 30-day mortality was alike across the stages of angiographic severity.

This study was published in the August issue of JAMA.