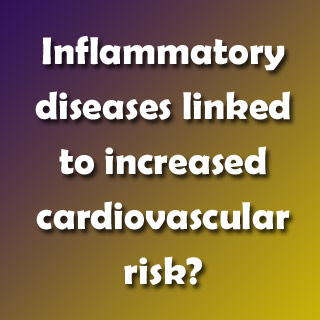 Patients undergoing two severe autoimmune disorders which cause muscular inflammation seem to be at an increased risk of developing cardiovascular disease. This novel finding was discovered by a group of Montreal reseacrhers.

Polymyositis (PM) and dermatomyositis (DM) are known to be most common in women and seniors, although they could possibly affect people of any age. Both diseases are believed to be caused by a hyperactive immune system which attacks healthy tissue, more or less as if the body had become allergic to itself.

Dr. Christian A. Pineau and his team at the Research Institute of the McGill University Health Centre (RI-MUHC) were noted to have linked muscular inflammation to increased cardiovascular risk.

Apparently, this causes serious inflammation of muscle tissue inside the body which then results into weakness, reduced mobility and rashes in the case of DM. Also, muscles in the heart and the lungs may be affected.

“Inflammation has recently been recognized as a risk factor – along with hypertension and cholesterol problems – for arterial diseases that can lead to events such as heart attacks,” says Dr. Pineau, a researcher in the RI-MUHC Musculoskeletal Disorders Axis, as well as co-director of the Lupus and Vasculitis clinic at the MUHC.

It was estimated that approximately one in 5,000 people suffer from PM and nearly 7,000 in Canada and 75,000 across North America go through DM. The researchers also noted that the immunosuppressive therapies which are at present being used to treat PM and DM may have a preventive effect against heart attacks.

Having observed a few patients concern about the potential side-effects of immunosuppressive therapies, such as reduced immunity to infection, Dr. Pineau stated, “This is an extremely interesting finding for patients who are suffering from PM and DM but who may be hesitant to undergo this type of treatment.”

Co-author of the research, Dr. Sasha Bernatsky stated that, “Our results indicate that the risk of heart attack is twice as high in these people as in the general population. Each year, one out of every 200 people with muscle inflammation, or myositis, succumbs to a stroke and one out of 75 to a heart attack.”

“Sometimes patients do not want to undergo immunosuppressive treatment, which can last for years. Knowing that it has additional preventive effects may help some people decide to opt for the treatment,” adds Dr. Bernatsky.

Cardiovascular diseases appear to be the world’s leading cause of death. Adding to this, the researchers hope that their results could present a clearer picture of the possible benefits and possibilities of immunosuppressive treatment.

As a result of their encouraging findings, Dr. Pineau along his team are now trying to focus their attention to probable benefits of immunosuppressive therapy on other health risks associated with inflammatory diseases.

The research findings have been published in The Journal of Rheumatology.