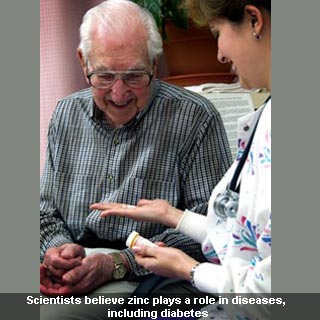 Scientists have claimed that a new molecular sensor has been developed by them that may expose the quantity of zinc in cells, which apparently could give information on several diseases including type 2 diabetes. The research conducted by experts at Imperial College London and Eindhoven University of Technology in The Netherlands allegedly states that it may open the door to the unknown world of zinc biology by giving scientists a precise way of gauging the concentration of zinc and its position in cells for the first time.

Five percent of all the proteins made by the body’s cells may need zinc and it could be involved in several processes in the body. According to scientists, zinc may play a role in various diseases. For instance, it apparently assists package insulin in pancreas cells. In people with type 2 diabetes, the gene that controls this packaging could frequently be malfunctioning.

Earlier, researchers used rudimentary chemical techniques to apparently get a rough idea of the concentration of zinc in cells. Nevertheless, a precise picture could not be formed of how much zinc was present in the cells or where it was within them. The researchers have supposedly developed a sensor via fluorescence proteins that may operate as a molecular switch by changing color when they combine with zinc, showing how much zinc is present in an individual cell.

Professor Guy Rutter, one of the authors of the research from the Division of Medicine at Imperial College London, commented, “There has been relatively little biological work done on zinc compared to other metals such as calcium and sodium, partly because we didn’t have the tools to measure it accurately before now. Zinc is so important in the body – studies have suggested it has roles in many different areas, including muscles and the brain.”

Two color variants of a green fluorescent protein from jellyfish may create a new sensor known as Fluorescence resonance energy transfer (FRET)-based sensor. The researchers supposedly modified the first variant to give off light at a certain wavelength, and apparently adjusted the second variant to collect that light. When the proteins joined to the zinc ions, they may became spaced out and the transfer of light between them became weaker. The researchers apparently used a fluorescence microscope to identify the wavelengths of light released by the proteins. This may expose the zinc in the cell, with colored patches noticeable where the proteins spotted zinc.

A new sensor was used by the researchers to apparently look for zinc in pancreatic cells, where insulin is packaged around zinc ions. Preceding research had claimed that in people with type 2 diabetes, the gene that controls the packaging process is said to be frequently faulty which affects the way insulin is stored. Inside certain parts of the cell where insulin is found, a high concentration of zinc ions were found by the researchers. It is anticipated that their new sensor may assist the scientists in looking more closely to find out accurately how zinc is involved in diabetes.

Professor Rutter mentioned, “We can now measure very accurately the concentration of zinc in cells and we can also look at where it is inside the cell, using our molecular measuring device. This sort of information will help us to see what is going on inside different tissues, for example in the brain in Alzheimer’s disease, where we also suspect zinc may be involved. We hope this new sensor will help researchers learn more about zinc-related diseases and potentially identify new ways of treating them.”

The researchers may want to develop their new sensor to look at zinc in a living mouse model, so they can monitor the movement of zinc in different tissues, for instance in diabetes.

This research was published in Nature Methods.