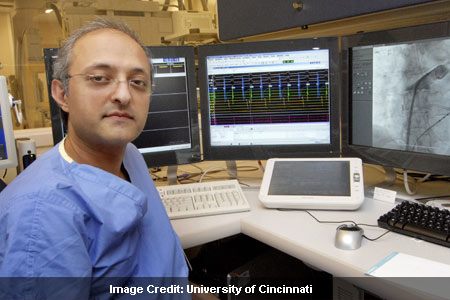 This news may interest heart patients. A study from an international multicenter claims to show new methods to better the health of patients with mild heart failure at the same time decreasing the expenses required for care. Mehran Attari, MD, a UC Health electrophysiologist, along with cardiologists around the world, apparently discovered that the use of cardiac resynchronization therapy (CRT) which is an appliance used to electrically coordinate the contractions of the heart’s two lower chambers in patients who are in early stages of heart failure, may considerably reduce hospitalization and death.

This study is known as the Multicenter Automatic Defibrillator Implantation Trial-Cardiac Resynchronization Therapy, or MADIT-CRT. There were approximately 110 sites in 14 countries caught up in the study.

Attari observed that levels III and IV apparently involve shortness of breath and chest pain in moderate activities or during rest. According to him, the aim in this study was to focus on mild, asymptomatic heart failure patients who usually wouldn’t qualify for CRT.

Attari mentioned, “We looked at classes I—those with no symptoms whose heart issues were remedied with medications—and II—those who were mildly symptomatic.”

Approximately 1,800, patients were used as a sample. They were divided into two groups. The first group only had an implantable defibrillator i.e. a device that may carry internal electric shocks to a patient’s heart whenever a life-threatening cardiac rhythm is identified. The second group had a CRT defibrillator.

Attari remarked, “Most defibrillators have two electrode wires—one in the right atrium and one in the right ventricle—to maintain the normal coordinated pumping relationship between the upper and lower chambers of the heart. The CRT device has a third lead that is positioned in a vein on the surface of the left ventricle to simultaneously stimulate the left and right ventricles and restore a coordinated squeezing pattern.”

For a period of three years, both the groups were evaluated every three months. Approximately a 34 percent fall in both mortality and hospitalization was observed by the experts in class I and II heart failure patients. Additionally it was found that that CRT apparently decreased the threat of heart failure events by an approximate 41 percent when weighed against the defibrillator.

Attari concluded by saying that this shows that by using the CRT device in patients with mild heart failure, the progression of the disease could be prevented. It could possibly stop future problems, in addition to reducing hospital costs.

These findings have been presented at the European Society of Cardiology Congress 2009. Also this study will be published in an advanced online edition of the New England Journal of Medicine.