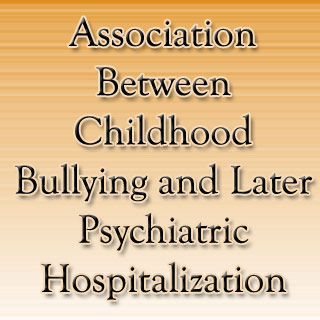 Victims of childhood bullying may experience grave consequences later in their life. Apparently the victim may suffer from psychiatric problems in future. It may be seen in both males as well as females, although females seem to have more tendencies to be affected in spite of of pre-existing psychiatric problems. This is claimed as per the outcome of a new study.

Providing background information, the authors commented, “Bullying can be defined as an aggressive act embodying an imbalance of power in which the victims cannot defend themselves accompanied by an element of repetition.”

The authors further mentioned that bullying and victimization seemed to be associated with poorer family functioning, inter-parental violence and parental maltreatment. It may frequently result in concerned outcomes for both bullies as well as victims. Even though there have been studies on the consequences of bullying, there are no previous population-based studies that examined late adolescence or adulthood outcomes of childhood bullying among both males and females.

A link between bullying and victimization in childhood at around age eight and future psychiatric hospitalization and treatment with antipsychotic medication from ages thirteen to twenty-four was examined by Andre Sourander, M.D., Ph.D., of Turku University Hospital, Turku, Finland, and colleagues. Approximately 5,038 Finnish children took part in the nationwide Finnish 1981 Birth Cohort study. Information was supposedly accumulated from parents, teachers, participants’ self-report and a national register of hospital and medication records.

The authors observed that bullying behavior could be measured as a sign of the threat of a later psychiatric disorder. This may increase into a grave issue for those involved and for society in general.

The authors commented, “Developing prevention systems requires knowledge of the biological, psychological and social mechanisms involved. As later psychological disorders have been found to be associated with individuals displaying childhood bullying behaviors, there is a need for the integration of mental health services into the school context.”

The authors concluded by mentioning that it is important to inform policymakers, school professionals and the public about the potential short-term and long-term consequences of bullying and victimization.

This study was published in the September issue of Archives of General Psychiatry, one of the JAMA/Archives journals.