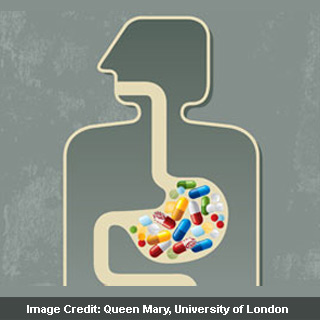 A novel study carried out at Queen Mary, University of London and Leicester Royal Infirmary seems to have rejected fears about the cancer causing effects of a most common heartburn treatment.

‘Proton pump inhibitors’ (PPI) seems to be the most commonly used treatment for chronic acid reflux, or ‘heartburn.’ Heartburn is known to be a painful burning sensation in the chest, neck and throat which is experienced by nearly one third of people in developed countries.

Apparently, frequent and prolonged heartburn is known to cause ‘benign oesophagitis’, a reversible inflammation of the gullet. However if left untreated a condition called Barrett’s Oesophagus (BE) may perhaps occur in approximately 10 per cent of sufferers.

Additionally it could result into a potentially fatal cancer called oesophageal adenocarcinoma. It was estimated that BE is twice as widespread in the UK as compared to the USA. Also, oesophageal cancer rates in the UK seem to be the highest in the world. For instance it appears to be four times more common in contrast to other European countries.

Despite their excellent safety record, it was uncertain if continuing use of PPIs to decrease the discomfort of heartburn could perhaps raise the possibility of developing either BE or the spread of the associated cancer.

Co-author of the study, Professor Janusz Jankowski said that, “This is one of the most detailed studies investigating both the laboratory and clinical side of proton pump inhibitor drugs. As a consequence we are now better able to inform patients of the good benefit/risk ratio of this commonly prescribed therapy.”

For the purpose of the study, experts examined tissue samples from the oesophagus lining of approximately ninety volunteers. Each participant was given PPI drugs at either a high or low dosage.

The findings revealed that there appeared to be no difference in the rate at which BE developed, neither was there a change in the amount of precancerous cells in either group.

Though there had also been doubts about how the treatments may possibly affect people already suffering from BE. The study revealed no evidence that this led to any deterioration of the condition or any extra incidences of cancer.

BE is believed to have been marked by changes in the cells of the oesophagus lining i.e. squamous epithelium which makes them more like the cells of the intestines i.e. columnar epithelium. In addition to the rising risk of oesophageal cancer, the condition seemed to narrow the oesophagus and patients could experience pain whilst swallowing. Supposedly, the chance of cancer developing is relative to the length of BE.

PPIs appear to function by blocking the action of gastrin and are known to enhance the standard movement of cells in the gastro-intestinal tract. Gastrin is believed to be a hormone which controls acid levels in the stomach. Since PPI therapy seems to increase the levels of gastrin in the body, it had been considered that this could cause expansion of BE affected tissue.

However, this was not found to be the case, the scientists observed neither expansion nor contraction of the abnormal tissue. Evidently, this is agreeable with existing UK practice, where PPI therapy is at present licensed only to treat heartburn and ‘oesophagitis’ but not BE.

The findings of the study have been published in the journal, Gut.