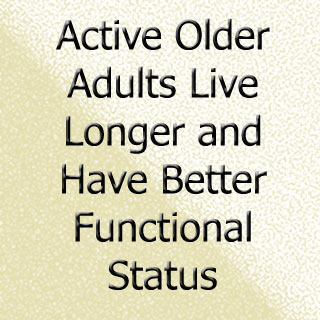 It seems to be very important to exercise regularly to remain fit and healthy. A lot of young people are already hitting the gym everyday as more and more people have become health conscious. Bearing this topic in mind, a study claims that older people who start or continue to do any kind of exercise seem to live a longer life and may have a lower possibility of disability.

Physical activity appears to be a modifiable behavior associated with health, functional status and longevity. Furthermore encouraging a physically active lifestyle has become an accepted public health goal. The authors provided this as the background information for this study. Nevertheless, most of the studies have apparently always focused on the advantages of physical activity among middle-aged people.

About 1,861 individuals who were born in 1920 and 1921 were examined. The subjects apparently went through evaluation in their homes at ages 70, 78 and 85 years, during which they were supposedly inquired about their physical activity levels. This analysis ws conducted by Jochanan Stessman, M.D., and colleagues at Hebrew University Medical Center and Hebrew University Hadassah Medical School, Jerusalem.

Those who did not have physical activity for more than 4 hours a week were apparently thought to be sedentary. But those who exercised for about four hours a week and carried out energetic activities like jogging or swimming at least twice a week or who apparently were occupied in usual physical activity were considered physically active. For instance, walking at least an hour everyday was believed to be physically active.

The authors commented, “Although the mechanism of the survival benefit is most likely multifactorial, one important finding was the sustained protective effect of physical activity against functional decline.”

The authors added, “Despite the increasing likelihood of comorbidity, frailty, dependence and ever-shortening life expectancy, remaining and even starting to be physically active increases the likelihood of living longer and staying functionally independent. The clinical ramifications are far reaching. As this rapidly growing sector of the population assumes a prominent position in preventive and public health measures, our findings clearly support the continued encouragement of physical activity, even among the oldest old. Indeed, it seems that it is never too late to start.”

Physical activity may seem to postpone the spiral of decline that apparently started with the incapability to carry out every day tasks and prolong through ill health and death. It may do so by apparently improving cardiovascular fitness, slowing loss of muscle mass, decreasing fat, improving immunity and curbing inflammation.

This study was published in the September issue of Archives of Internal Medicine, one of the JAMA/Archives journals.

A Green Diet can protect your Heart