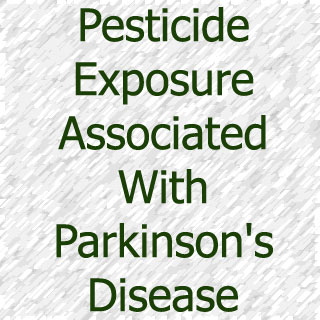 People whose job may involve contact with pesticides seem to have an increased possibility of having Parkinson’s disease. This is claimed by a new study.

In the late 20th century, the development of Parkinson’s disease was apparently associated with chemical exposure. This is according to the background information in the novel study. From then onwards, jobs like farming, teaching and welding may have all been thought to increase the danger of acquiring Parkinson’s disease.

Around 519 individuals with Parkinson’s disease and 511 controls who were claimed to be of the same age and sex and lived in the same place were supposedly examined by Caroline M. Tanner, M.D., Ph.D., of the Parkinson’s Institute, Sunnyvale, Calif., and colleagues. Questions about their occupational history and exposure to toxins, including solvents and pesticides were apparently asked to the participants.

Working in agriculture, education, health care or welding was apparently not linked with Parkinson’s disease, nor was any other particular occupation studied after adjustment for other issues.

The authors commented, “Growing evidence suggests a causal association between pesticide use and parkinsonism. However, the term ‘pesticide’ is broad and includes chemicals with varied mechanisms. Because few investigations have identified specific pesticides, we studied eight pesticides with high neurotoxic plausibility based on laboratory findings. Use of these pesticides was associated with higher risk of parkinsonism, more than double that in those not exposed.”

Three individual compounds like an organochloride i.e. dichlorophenoxyacetic acid, an herbicide i.e. paraquat and an insecticide i.e. permethrin were apparently related to apparently thrice the risk for acquiring Parkinson’s disease. All three have supposedly demonstrated to have effects on dopaminergic neurons which may be affected by Parkinson’s disease in the laboratory.

The authors mentioned, “This convergence of epidemiologic and laboratory data from experimental models of Parkinson’s disease lends credence to a causative role of certain pesticides in the neurodegenerative process.”

The authors concluded by mentioning that other pesticide exposures such as hobby gardening, residential exposure, wearing treated garments or dietary intake were not assessed. Because these exposures may affect many more subjects, future attention is warranted.

This study was published in the September issue of Archives of Neurology, one of the JAMA/Archives journals.