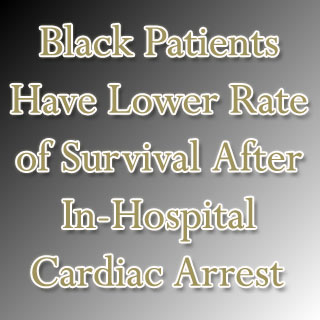 Race sometimes plays a role in many health issues. Apparently compared to white patients, black patients who have an in-hospital cardiac arrest may have considerably less chances to survive. A new study reveals that this is mainly because they supposedly have lower rates of successful resuscitation and post resuscitation survival. Even though much of this survival difference may be linked to the hospital in which the black patients received care.

Survival following in-hospital cardiac arrest represents a unique opportunity to examine racial disparities in medical care and outcomes. In-hospital cardiac arrest is an emergency condition tightly linked to processes of care and for which there is little debate regarding clinical appropriateness of treatment in eligible patients. This is provided by the authors as background study.

The authors commented, “Racial differences in survival have not been previously studied after in-hospital cardiac arrest, an event for which access to care is not likely to influence treatment.”

The data from the National Registry of Cardiopulmonary Resuscitation (NRCPR) were used by Paul S. Chan, M.D., M.Sc., of Saint Luke’s Mid America Heart Institute, Kansas City, Mo., and colleagues. This data was examined to find out if racial differences could be present in survival for patients with in-hospital cardiac arrest. About 10,011 patients from 274 hospitals apparently went through defibrillation for a cardiac arrest. About 67 years was the average age of the research population. There were about 6,021 men and approximately around 1,833 were black.

Various patient and hospital aspects are apparently varied by race, including white cardiac arrest patients supposedly being older and have more chances to be male. Black patients apparently have more chances to have ventricular fibrillation as their preliminary presenting arrest rhythm, as they were apparently sicker during the time of cardiac arrest. The sickness may include higher rates of renal insufficiency, diabetes mellitus, central nervous system depression, acute stroke, pneumonia, sepsis, major trauma, and requirement for hemodialysis. Also the odds were higher for them to be admitted in a hospital unit not supervised, to a hospital with more than 500 beds, and in the southeastern United States.

Experts discovered that black patients apparently had about 27 percent lower overall rate, and an approximate 12 percent lower total rate, of survival to hospital discharge, as opposed to white patients.

The authors mentioned, “These unadjusted survival differences by race were, in large part, attributable to black patients being more likely to receive treatment at hospitals with worse outcomes.”

These differences apparently tapered after regulating the patient characteristics and the hospital to which the patient was admitted.

The authors concluded by mentioning that collectively these findings suggest that strategies to eliminate racial disparities in survival after in-hospital cardiac arrest are not likely to succeed. Unless they are accompanied by successful identification and implementation of interventions that improve resuscitation survival in the poorly performing hospitals in which black patients are more likely to receive care.