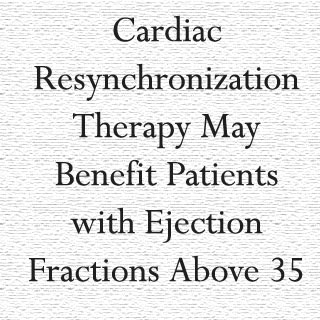 Cardiac resynchronization therapy is said to be a new form of treatment for congestive heart failure which may be caused by dilated cardiomyopathy. Heart failure patients with moderate ejection fractions, over about 35 percent, may receive similar advantages from cardiac re – synchronization therapy (CRT) as opposed to those with low ejection fractions of equal to or supposedly less than 35 percent. A new research from Medtronic has apparently claimed this finding.

A retrospective analysis from the PROSPECT study, which claims to be the leading CRT post-market clinical study of its kind with primary endpoints measuring echocardiographic predictors of CRT response, suggests the probability for CRT to apparently profit more than about 1 million heart failure patients worldwide who have an ejection fraction supposedly bigger than 35 percent and may not be presently specified to receive CRT therapy.

“While more research is needed, this analysis shows the potential value of CRT for a broader spectrum of heart failure patients. Regardless of their ejection fraction, patients in this study had similar outcomes indicating ejection fraction alone may not be a good measure of a patient’s response to CRT,” commented, Eugene Chung, M.D., director of the Heart Failure Program at The Christ Hospital, Ohio Heart and Vascular Center in Cincinnati, Ohio, and lead investigator of the PROSPECT study,

After six months post implant, the CRT patients with moderate and severe heart failure and side QRS duration i.e. the time needed for the heart muscle to contract and in this case about 130 milliseconds or more were compared.

Marshall Stanton, M.D., vice president of clinical research for the Cardiac Rhythm Disease Management business at Medtronic, commented, “These results are promising and identify a new, critical research need to prove that CRT can have similar benefits to a broader group of patients that don’t meet the current indications.”

Marshall Stanton further added that bringing the significant benefits of CRT in improving mortality, quality of life and overall cardiac function to more patients is an exciting prospect worthy of further exploration.