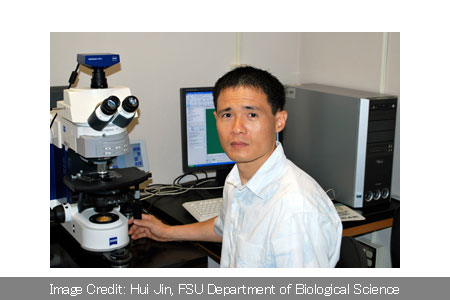 A cell biologist at the Florida State University discovered that when a major molecular player called as Pds5 goes missing; chromosomes apparently fail to separate and pair up properly, and this might lead to birth defects like Down syndrome. This was found by using yeast genetics and a new system to selectively eliminate a single protein from the cell division process known as meiosis.

This finding is said to be landmark. The study throws new light on the protein Pds5, its critical regulatory role during meiosis, and the effect of its nonattendance on the molecular-level genesis of human chromosomal birth defects that may comprise of Down, Edwards, Patau, Turner, Klinefelter’s and XYY syndromes. This study may add to the gradual development of targeted, molecular-level interventions.

Hong-Guo Yu, principle investigator, an assistant professor in FSU’s Department of Biological Science, commented, “To produce a genetically balanced gamete (sperm and egg), the cell must contend with two sets of chromosome pairs, homologs and sisters. Homologs are the nearly identical chromosomes inherited from each parent; sisters are exactly identical pairs that are produced like photocopies as part of normal cell division.”

He further explained, “During normal meiosis, the process of division that halves the number of chromosomes per cell, my colleagues and I discovered that Pds5 regulates the pairing and synapsis (joining together) of ‘mom and dad’ homologs. We also learned that Pds5 plays a vital role in the synaptonemal complex, a glue-like protein structure that homologs use to literally stick together as they pair up. In addition, we found that, although sister chromatids enter meiosis in very close proximity to one another, Pds5 acts to inhibit synapsis between them, a good thing because, then, meiotic conditions support the necessary pairing of homologs.”

As a result, a chromosomal catastrophe may be generated by eliminating Pds5 during meiosis.

Yu mentioned, “In order to observe what happened when the Pds5 went missing from the process, we performed a ‘molecular genetics trick’ that had never been applied to this particular protein before, and it worked. We successfully engineered yeast cells that shut down Pds5 only during meiosis, but not when they were vegetative.”

Consequently, Pds5 was absent and so could not adjust homolog organization and transmission in the meiotic yeast cells. The synaptonemal complex, which usually could support the synapsis of homologs by apparently forming a sticky bond along their entire length, supposedly failed to form. In the meiotic fault that followed, the identical sister chromosomes supposedly started to synapse instead.

Yu remarked, “When Pds5 is removed and sister chromatids become synapsed as a result, the segregation and recombination of homologs essential for genetic diversity fails. This finding is highly important, because failure to generate a crossover between homologs leads to chromosome missegregation and can cause human chromosomal birth defects such as Down syndrome, which affects about one in 800 newborns in the United States.”

Yu commented, “Now, we are investigating the other factors that interact with Pds5 during meiosis to regulate chromosome segregation and homolog synapsis. “Long term, we hope to achieve a comprehensive understanding of the molecular mechanisms behind chromosomal birth defects and see our research contribute to the creation of targeted interventions during meiosis.”

Yu believes that this ground breaking study may have considerably extended earlier observations of the function of Pds5 in the supposed configuration of meiotic chromosome structure.

This finding was published in the Journal of Cell Biology.