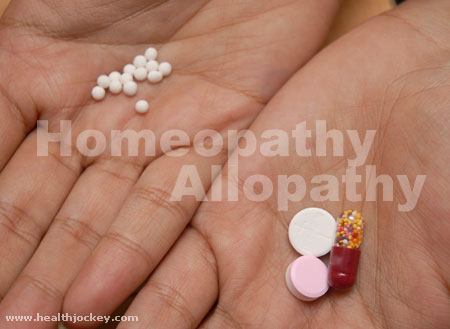 The science of healing has evolved over the years from using chants & charms as medicine, and witches & tantriks as doctors, to being able to identify and destroy the exact cell causing all the trouble. Various schools of thought defining what a disease means and how it should be handled took birth, grew and eventually died. One schools’ healer was called as a quack by another; mud-slinging was part of the game. Few methods passed the test of time based on their strong scientific foundation, visible and consistent results and loyal followers and preachers.

But today, we are living in an age which is witness to numerous healing arts like allopathy, homeopathy, ayurveda, reiki, naturopathy, magnet-therapy, water-therapy, grapho-therapy, hypnotherapy, acupuncture, aromatherapy, acupressure and more. Each one of these systems has their own philosophy as to what the state of being diseased implies and an independent set of rules governing their management.

Today is an era where believers have recognized the scope and potential of their therapy as well as realized and accepted its limitations. There is space for each to breathe and grow leaving the patient with a wide array of choices coupled with a vast amount of confusion. The two systems which have the largest number of documented followers are Allopathy, better known as Modern Medicine and Homeopathy.

The Doctor who gives ‘sweet-pills’ is what the Homeopath is generally referred to. The German healing science of Homeopathy was discovered and developed by Dr. Samuel Hahnemann over 200 years ago, an allopath himself, out of dissatisfaction arising from the then prevalent methods of curing diseases which were extremely crude and more painful than the disease itself. It is based on the axiom- Similia Similibus Curentur i.e. Let Likes be cured by Likes. More simply put it implies that a symptom is cured by a drug which is capable of producing a similar symptom in a healthy human being, thereby producing an artificial drug-disease which overpowers the natural disease and eradicates it. This is where it differs from allopathy which uses drugs that produce an action exactly opposite to that of the symptom of the disease, thereby relieving it.

Modern medicine practitioners believe in disease being a material entity which must be reversed or expelled from the body by using large doses of multiple drugs based on the symptoms. They believe that it’s a disturbance of a particular organ or tissue and the affection is limited only to that part. Alternatively, Homeopathic science propounds disease to be a change brought about by dynamic influences, dynamic implying a force/energy that is invisible and felt only by the effects it produces e.g. Magnetism, gravity, air, etc. The dynamic influence affects not only the body, the skin or the eye or the bowel but also the mind, not necessarily always, but most often. The disturbance is manifested in all spheres of the human existence. Thus, when disease has to be removed, it has to be removed from all the spheres that it has influenced. This makes the title of Holistic Healing bestowed upon homeopathy completely justified.

The modern prescriber believes that every headache is the same, each diarrhea identical and every disease in no matter who needs the same medication. Because it’s the disease that he treats, not the person in suffering. But the homeopath deems it necessary to individualize each patient, differentiate one man’s headache from the other’s and give each new case of the same pathology a unique, separate and complete identity of its own. Thus he tries to delve into individual characterizing traits of each patient, their personal likings and aversions, their nature etc. Thereby, remedying every case of headache with a different remedy and healing every diarrhea with a unique medication.

Homeopathy is a gentle healer, curing diseases by using infinitesimally small doses of medication, most of which cannot even be measured or shown in physical values. It is astonishing to see that such minuscule amounts of drug can affect cure but it’s fascinating that they do not cause harm or damage due to that very minuteness. The speed with which these dynamic doses bring about relief in multiple planes i.e. the body and mind is truly a mind-bending phenomenon. This speed is matched well by its allopathic counterpart.

Modern medicine has great scope of treating the suffering in most disease conditions but there are many that have found no solution in this form of medication. Eczema, psoriasis, asthma, allergies, hypertension, diabetes, heart disorders, thyroid abnormalities, psychiatric disorders to name a few, all require lifelong medication bringing along with them significant long-term side-effects. Homeopathy brings about healing without any side-effects especially in long-term treatment. It heals by stimulating the body’s own disease fighting mechanism which is commonly known as immunity. Thus, in many cases patients need not depend on lifelong medication and can expect a very speedy relief from symptoms. It not only relieves the symptoms but also slowly uproots the entire disease from the body and brings about a state of complete health.

Thus, like each theory has its own vantage points and pitfalls, similarly, both homeopathy and allopathy are two sciences dealing with the art of healing in their own ways, both measurable by their immense success rates. It’s a matter of choice, like for a car or food products. It depends more on belief and faith in the method of healing and more importantly the healer himself.