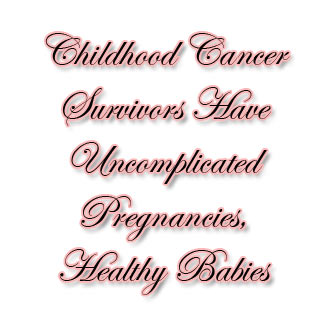 Nevertheless, increased rates of preterm births and low birth weight particularly among those with particular cancers or who were give certain treatments, may specify that these pregnancies and infants ought to be closely examined. Chemotherapy, radiation treatment and surgery for cancer may influence the future reproduction of patients with childhood cancers. As the figure of young cancer survivors increases, recognizing probable unfavorable results among their offspring may be a rising concern.

To recognize women who were detected with cancer from 1973 to 2000, when they were younger than 20 years, cancer registries were apparently used by Beth A. Mueller, Dr.P.H, of Fred Hutchinson Cancer Research Center and the University of Washington, Seattle, and colleagues. They then used associated birth records to locate about 1,898 infants born to these women post their cancer detection. These births were apparently compared with about 14,278 among women of similar age and race who had babies the same year but did not have cancer.

Infants born to childhood cancer survivors did not appear to be at an increased risk of birth defects or of death, but apparently did have a 54 percent increased risk of being born preterm and an approximate 31 percent augmented danger of weighing less than 2,500 grams. Nonetheless, these infants did not seem to be at an increased danger of being tiny for gestational age, signifying that size differences may not be severe enough to meet the criteria for this description.

The infant outcomes were also analyzed by the experts with the kind of cancer and treatments the mother underwent.

The authors commented, “Risk of preterm delivery was greatest after leukemia but also was associated with lymphoma, bone tumors, soft-tissue sarcomas and an abdominal primary cancer site. Among treatment exposures, chemotherapy was associated with a two-fold increased risk of preterm delivery, but relative risks were significantly increased for most other modalities as well.”

The authors mentioned, “Children and adolescents with cancer can be reassured that we did not find an increased risk of malformations or infant death among their first subsequent offspring. The increased occurrence of low birth weight and preterm delivery among childhood cancer survivors and of preterm delivery among young genital tract carcinoma survivors that we and others have observed may indicate relatively less severe potential problems among offspring. However, these outcomes can still greatly affect families, are associated with significantly increased costs and indicate a need for close monitoring of pregnancies among childhood and adolescent cancer survivors.”

In a different report, similar records were used by Eric J. Chow, M.D., M.P.H., also of Fred Hutchinson Cancer Research Center, Seattle, and the same group of colleagues to recognize about 470 offspring of men detected with childhood cancers between 1973 and 2000. A sum of about 4,150 fathers who were of similar age and race/ethnicity and had babies born the same year, but had not been diagnosed with cancer, were also examined.

If one compares the infants born to men who were not cancer survivors, offspring of men with cancer apparently had a ‘borderline risk’ of weighing less than 2,500 grams at birth, particularly if the father’s cancer was detected at a younger age or was treated with chemotherapy.

The authors remarked, “However, they were not at risk of being born prematurely, being small for gestational age, having malformations or having an altered male to female ratio. Overall, female partners of male survivors were not more likely to have maternal complications recorded on birth records vs. the comparison group.”

Nevertheless, a greater danger of pre-eclampsia was apparently linked with a few cancers, particularly brain tumors.

The authors commented, “Most pregnancies resulting in live births among partners of male childhood cancer survivors were not at significantly greater risk of complications vs. comparison subjects.”

The authors concluded by mentioning that their findings of increased low birth weight and pre-eclampsia associated with some diagnostic groups raises the possibility that prior cancer therapy may affect male germ cells with effects on female partners and progeny of male survivors.

The findings were published in the October issue of Archives of Pediatrics & Adolescent Medicine, one of the JAMA/Archives journals.