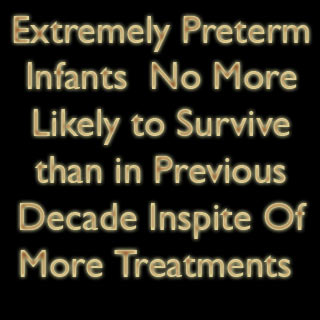 Preterm babies are born before their due date. Since they are born before they complete the cycle of 9 months, they may be weak and frail when they are born. Also they could suffer from serious health problems. A study claims that extremely preterm infants born at 22 to 24 weeks’ gestation in 2001 to 2003 even after receiving life-sustaining interventions apparently had less chances of surviving similar to infants born in 1993 and 1995.

For more than a decade, it has been debated whether scientific advances can continue to lower the border of viability or whether this goal should even be attempted. Evidence suggests that, despite this clinical and ethical debate, extremely preterm infants are regularly resuscitated. This was mentioned by the authors who provided the background information.

The authors commented, “Although recent studies report that most infants die within days after birth at the border of viability, many remain concerned that aggressive resuscitation results in prolonging death and suffering in some.”

Medical records were assessed for recovery efforts, intrusions in the neonatal intensive care unit (NICU), time of death and illnesses or disabilities in survivors.

During the two study periods, about 160 women delivered 179 infants, as well as around 90 women who delivered 104 infants during the early era and about 70 women who delivered 75 infants during the late era. As opposed to the early time period, women in the later period had two times more chance to be taken to a higher level of care, around 48 percent had more odds to be supervised by sonogram, roughly 60 percent were more expected to be given antibiotics and approximately 61 percent had more likelihood to get antenatal steroids.

In addition, infants admitted to the NICU between 2001 and 2003 were more often supplied with life-sustaining interventions, plus high-frequency ventilation, chest tubes and administration of dopamine and steroids as compared to those were those admitted between 1993 and 1995.

Yet, the rate of death based on gestational age apparently stayed unchanged for infants born in both time periods.

The authors mentioned, “Mortality has not changed in our hospital over the past 10 years despite escalation in care at each gestational age studied. What has changed is the length of time until death. Applying all available medical technology to the perinatal care of extremely premature infants prolongs but does not prevent their death.”

Clinicians discussed the odds of the survival of the fetuses with around 82 percent of parents in the late era and about 72 percent in the early era.

The authors concluded by mentioning that the gold standard for decision making is a collaborative one that balances physician, parent and fetal/infant concerns. Better understanding of the process of this decision making, and its long-term impact on families, is critical to designing further studies with the most clinically relevant outcomes.

This study was published in the Archives of Pediatrics & Adolescent Medicine, one of the JAMA/Archives journals.