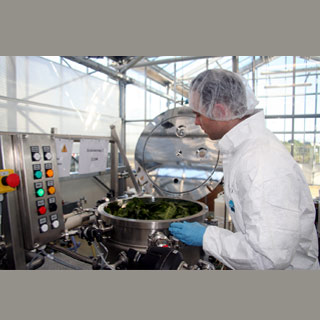 Researchers at the Fraunhofer Institute for Molecular Biology and Applied Ecology IME in Aachen, Germany claim that antibodies which could guard against HIV infection thereby assisting in the prevention of AIDS may perhaps be at present produced in plants.

As part of the EU Pharma-Planta project, Fraunhofer researchers seem to have helped in establishing the essential principles needed in order to produce the HIV-neutralizing antibody 2G12 in genetically modified tobacco plants. Additionally, they are currently providing the materials required for clinical testing.

It was estimated that every year, approximately 2.7 million people become infected with HIV. It was observed that antibodies like 2G12 can provide protection against the transmission of the virus by attaching to a protein called gp120. Apparently, this protein is found on the virus surface.

This seems to prevent the virus latching onto its target cells which in turn reduces the probability of infection. Presently, the majority of antibodies are believed to have been produced in mammalian cell cultures. Mammalian cell cultures are noted to be a process which is complex and expensive. However, the production of antibodies by ‘molecular farming’ in plants appears to be an alternative that costs much less. Furthermore, it could perhaps be carried out on a much larger scale.

The Fraunhofer researchers have supposedly been active in developing the ‘molecular farming’ technology. They seemed to have collaborated with nearly 38 industrial and academic partners as part of the Pharma-Planta project where they have applied this technology in the fight against HIV. In order to harvest the antibodies from plants, the researchers initially had to separate the antibody genes from human immune cells and then transfer it to the genome of a tobacco variety. This variety of tobacco was known as Petite Havana SR-1.

“The genetically modified plants then produce the antibody protein as they grow,” explains Dr. Stephan Hellwig, director of production at the IME.

But how could they be able to recover the antibodies from these tobacco plants? In order to isolate these proteins from numerous hundred kilos of plant material, the researchers were observed to have developed a complete process and system for antibody extraction and purification. The harvested tobacco leaves seemed to have been initially washed and crushed. Subsequently, the antibodies were noted to have been extracted and purified in a series of filtration and chromatography steps.

The previous year researchers carried out a pilot test procedure for the foremost time. After four rounds (‘engineering batches’), they appeared to have processed a sum of 800 kilograms of plant material grown in the institute’s own greenhouse.

Dr. Jurgen Drossard, head of quality assurance at the IME, elucidated that, “In the test runs, we collected the logistical and technical process data that we needed to develop a pilot system which meets the high standards required in the production and purification of pharmacological substances. The purified substance was tested in pre-clinical safety studies at the end of 2008 in the UK, and no negative effects were observed.”

Evidently, this year, the Fraunhofer researchers have built a GMP-compliant, semi-automatic pilot system and began operations at Fraunhofer IME. GMP is known as a good manufacturing practice. This, they did in collaboration with Sartorius-Stedim, the laboratory and technical process service provider. Supposedly, it is an extremely strict regulatory system under which all pharmaceuticals are produced.

“Since there are no established, comparable processes, we have to work together with the relevant authorities so that we can ultimately obtain a production permit for a plant-made pharmaceutical that can be used in human beings,” says Dr. Drossard, explaining the procedure.

Nearly, 1,000 kilograms of plant material could be processed in the system every week. In view of the fact that, 1,000 kgs, allegedly is the highest volume of genetically modified tobacco which they can currently grow in the IME greenhouses.

Once the production permit is granted, researchers are planning to generate the first antibodies under GMP conditions. These will then be used in a Phase I clinical research with one of the EU project partners in the UK.