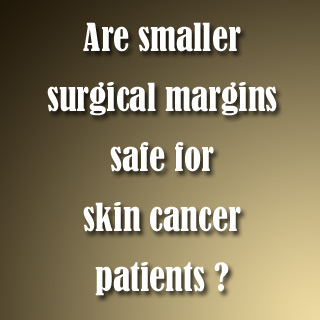 According to a latest study, many skin cancer patients seem to turn out just as well when surgeons remove nearly one inch of normal-looking tissue around the lesion instead of a larger safety margin.

Cutaneous melanoma is known to arise in pigment-producing cells. Also it seems to be associated with sun exposure, so primary tumors are often on the face and hands where patients have special concerns about unpleasant scars. Melanoma is known to be the most severe type of skin cancer. According to the National Cancer Institute, the percentage of Americans who develop the disease is noted to have been doubled in the past 30 years. Unlike many other common cancers, melanoma seems to affect people across a wide age spectrum. Though incidence rates appear to be highest among senior citizens, it is also one of the more ordinary cancers in adolescents and young adults.

Apparently, the purpose of the safety margin is to eliminate both the primary tumor and any malignant cells which might have spread into the neighboring skin. This study was believed to be a combined data from five analysis which suggested that a minor benefit to wider surgical margins. However, it was observed that the difference was not statistically noteworthy.

Lead author of the study, Michael Sladden, M.D., of the University of Tasmania in Australia, stated that, “The most important consideration is to make sure that (the lesion) is removed with as much certainty as possible. However, quality of life after surgery is an important consideration and unnecessary disfigurement should be avoided.”

Surgical oncologists who were not involved in the study claimed that the conclusion for people suffering from skin cancer may possibly require individualized treatment.

“Patients should be sure they are being treated by physicians who are very knowledgeable about melanoma so they don’t get over- or under-treated. They should seek out a very qualified team that includes pathologists as well as surgeons,” says Vernon Sondak, M.D., of the H. Lee Moffitt Cancer Center & Research Institute in Tampa, Fla.

This study examined patients with reasonably severe melanoma, where the tumor was believed to have attacked the deeper layers of skin, but did not spread to other organs. The combined studies included approximately 3,300 participants who were then observed to have been divided into two groups. One group seemed to have undergone surgery with removal of 0.5 inches to one inch around the lesion, whereas the other appeared to have wider margins of 1.5 inches to two inches. Furthermore, most of the studies were noted to have tracked patient survival for five to ten years.

“Our meta-analysis showed there was no statistically significant difference in overall survival between the two groups,” conclude the study authors.

Michael Sabel, M.D., a surgical oncologist at the University of Michigan claimed that since the studies took place some years ago, none included a latest method known as sentinel lymph node biopsy. Apparently, this technique may possibly assist in determining whether cancer cells have traveled to lymph nodes near the primary tumor. If the biopsy appears positive, further treatments can help control the spread of disease thereby improving survival rates.

Even though melanomas can take place from an existing mole, most start in unharmed skin. Supposedly, the conventional warning signals for a sore or lesion are Asymmetry, Border irregularity, Color variation, Diameter greater than one-quarter of an inch. Sabel said that at present, doctors include E for Evolution.

“Any change in a lesion — such as itching, bleeding, change in size or change in color — should prompt a visit to a doctor,” he continues.

Staying away from excessive sun exposure, especially during childhood when the skin is most sensitive seems to be the single most effective way to prevent skin cancer. Experts were of the opinion that seeking shade during the midday hours and making use of sunscreen on a daily basis, wide-brimmed hats and protective clothing may prevent skin cancer.

The findings of the study have been published in The Cochrane Library.