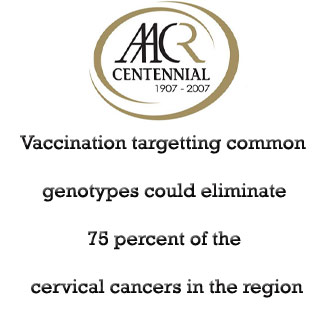 Cervical cancer is caused by HPV and is believed to be the most common cancer among Indian women, with a likely 132,000 new cases and around 74,000 deaths yearly.

Even though a broad range of human papillomavirus is seen across the population of India, HPV-16 and HPV-18 are said to be the most common kinds and a vaccination aiming these types could eradicate about 75 percent of the cervical cancers in the area. This was claimed by a study presented at the American Association for Cancer Research Frontiers in Basic Cancer Research Meeting.

To successfully vaccinate against HPV, experts require a better understanding of the genotype. Approximately more than 100 HPV genotypes have been detected in humans and at least 40 are apparently discovered in the anogenital tract, which makes HPV a shifting objective.

“In terms of cancer death, India has one fourth of the global burden and when you standardize for age it is the highest in the world. Most women present with an advanced state of the disease and compliance with treatment is very poor,” commented, A. Raj Kumar Patro, a doctoral student in the Department of Microbiology at the All India Institute of Medical Sciences in New Delhi.

Patro and colleagues analyzed around 106 women with persistent cervical cancer, about 524 women with an unhealthy cervix and a community-based population of women who went through HPV testing.

The outcome showed that among women with invasive cervical cancer, around 83 percent were associated with HPV-16 of HPV-18. Of those who had an unhealthy cervix, approximately 15.5 percent had HPV. HPV-16 and HPV-18 were connected to around 34.3 percent of usual disease, roughly 45.4 percent of low-grade disease and around 65.7 percent of high grade disease. By and large HPV frequency in the community cohort was about 7 percent.

Patro mentioned, “The vaccine is better accepted than screening in most cases, but it is difficult for most of the population to purchase it at the current price. At present it is purchased by the upper classes and if it becomes freely available through advocacy and outreach efforts, it could reach the general population.”

Patro mentioned the HPV vaccine is normally well received in India, with none of the ethical or spiritual oppositions like those seen in the United States. Nevertheless, economics stays as an imperative obstruction.