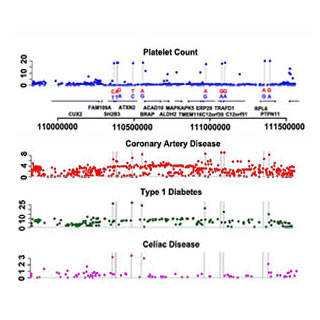 A new study claims that it has discovered the foundation of genetic variations in around eight blood measurements and the effect those variants could have on general human diseases. Blood measurements, as well as the amount and volume of cells in the blood, are believed to be regularly used to detect an extensive range of disorders, including anaemia, infection and blood cell cancers.

An international team of scientists calculated haemoglobin concentration from over 14,000 people from the UK and Germany. They discovered about 22 areas of the human genome caught up in the development of these blood cells. Of the 22 regions, around 15 had not earlier been recognized.

The study claims to stand for the first genome-wide association of blood measurements to be finished in cohorts with huge sample sizes.

Dr Nicole Soranzo, group leader at the Wellcome Trust Sanger Institute and co-lead of the HaemGen consortium, commented, “This study has been made possible by a great collaboration of scientists from the UK and Germany, and the contribution of clinical colleagues working in the field of heart disease, diabetes and coeliac disease in the UK, Germany and the United States and Finland. This unique collaboration has allowed us to discover novel genetic determinants of blood cell parameters, providing important insights into novel biological mechanisms underlying the formation of blood cells by the blood stem cells and their role in disease.”

The team evaluated areas of the human genome caught up in blood cell development against each other, with areas linked with a possibility of heart disease. Genetic data of around 10,000 people with disease and 10,000 healthy people were examined. They discovered that one of the genetic variants linked to platelet counts also may be the reason of a bigger threat of heart disease. The new variant was present in an area of the genome already identified to supposedly affect the threat of hypertension, coeliac disease and diabetes in children and young adults, or so-called type 1 diabetes.

Dr Christian Gieger, Head of the Genetic Epidemiology research unit at the Helmholtz Zentrum and co-lead of the HaemGen consortium, mentioned, “The study of blood traits is challenging because of the difficulty of teasing apart biological processes underlying the origin of blood cells. Until now, few genome-wide association studies have looked beyond single traits. But, through a systematic analysis of correlated traits we can begin to discover such shared genetic variants, forming the basis for understanding how these processes interact to influence health and disease.”

Nicole Soranzo remarked, “We have uncovered a novel variant linking platelet counts with heart attacks. Further characterisation of the regions uncovered in this study has the potential to improve our understanding how blood cell development is linked with human diseases, including blood cell cancers.”

Additional examination illustrated that these genetic risk factors are exceptionally seen in people of European origin. By evaluating human data as opposed to genetic data from chimpanzees, the team was able to deduce that the genetic variant was supposed to be the consequence of a selection episode preferring variants that raise the danger of heart disease, coeliac disease and type 1 diabetes in European populations about 3,400 years ago.

The authors put forward that the threat factors were positively chosen for as they apparently gave carriers an increased defense against infection.

The study is published in Journal Nature Genetics.