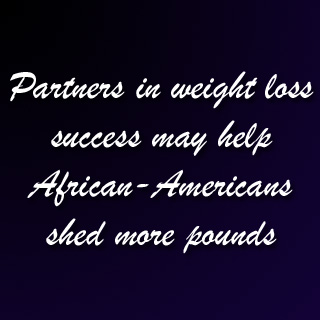 According to a latest study, enrolling in a weight loss program with a family member or friend may improve weight loss among African Americans. However, only if the involved partner seems to attend sessions regularly or also loses weight.

Obesity and its cardiovascular complications are known to affect many African Americans. Standard behavioral treatments for obesity may possibly be less successful in African Americans in contrast to whites. Besides, cultural modifications to these standard programs such as the addition of family members and support networks could enhance their effectiveness.

For the purpose of the study, lead author Shiriki Kumanyika from the University of Pennsylvania School of Medicine, Philadelphia along with her colleagues conducted a two-year trial of a culturally specific weight loss program amongst 344 African American men and women. The goal was to accomplish and maintain a 5 percent to 10 percent weight loss.

Components of the program were noted to have included counseling that encouraged self-monitoring of food intake and physical activity, distribution of pedometers, group sessions involving weight and activity checks and skill building, and community-based field workshops such as cooking demonstrations and gym visits. It was observed that a total of 63 individuals enrolled in the program alone 281 enrolled with a friend or family member in which 130 were designated as the main, or index, participants and 151 as partners.

Moreover, of the participants with partners, nearly 65 and 78 partners were believed to have been randomly assigned to a high-support group in which both individuals were expected to attend and participate completely in all treatment sessions.

The remaining 65 and 73 partners were noted to have been allocated to a low-support group, in which some portions of the program were restricted to the main participants. All participants’ progress seemed to have been measured at 6, 12, 18 and 24 months.

The findings of the study revealed that after 24 months, main participants seem to have lost an average of 2.4 kilograms i.e. about 5.3 pounds. Participants in the two family groups at first appear to have better attendance and greater weight loss in contrast to those in the individual group. But, these changes were noted to have been not statistically significant and decreased over time.

Kumanyika further said that, “We evaluated family and friend social support as a specific cultural adaptation strategy, which was added to an ethnic-specific program that was also adapted in other respects. Beneficial effects on weight loss were linked to actual rather than assigned partner participation and to partner success in losing weight. Further studies may elucidate ways to facilitate effective family or friend participation and to improve absolute weight losses.”

The findings of the study have been published in the journal, Internal Medicine.