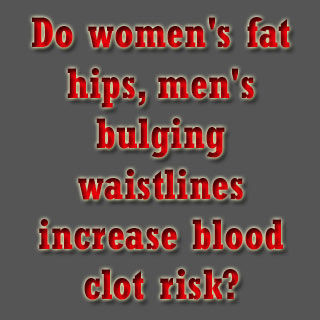 A latest study claims that excess weight on women’s hips and men’s waists may perhaps raise the chances of potentially severe blood clots. Also, the findings challenge a study that suggested increased hip circumference is known to be protective against blood clots.

The study experts put forward that the location of extra pounds seems to affect the risk of blood clots in middle-aged people. However, it appears to affect men and women in a different way.

During the 10-year prospective study, Danish scientists were believed to have evaluated the relationship between body mass, weight distribution and venous thromboembolism (VTE). VTE is known to be a condition where blood clots appear inside the veins. Apparently, VTE includes deep vein thrombosis and pulmonary embolism.

It was observed that 27,178 men and about 29,876 women who were between the ages of 50 to 64 years old were taken at study entry. It was observed that nearly 641 VTE events occurred according to medical records. Thromboembolism is known to be a chief cause of disease and death in adults. Moreover, it seems to result when a clot breaks free from one blood vessel and blocks another, usually from the legs to the lungs.

The study findings seems to have revealed statistically considerable positive associations between VTE and all measurements of body size, including body weight, body mass index (BMI), total body fat mass, waist circumference and hip circumference, amongst both men and women. Also, the associations appear to be the same in spite of the type of VTE.

Furthermore, they observed a direct relationship between VTE and weight distribution in both genders. When adjusted for waist and hip circumference, hip circumference seems to have been positively associated with VTE in women but not men whereas waist circumference was noted to be positively associated with VTE in men but not women. This relationship seems to be independent of other risk factors, such as smoking, physical activity, height, hypertension, diabetes, cholesterol, and amongst women the use of hormone replacement therapy (HRT).

“The BMI is a marker of excess weight and correlates well with body fat content in adults; however, it fails to consider the distribution of body fat,” says lead author of the study, Marianne Tang Severinsen, M.D., and researcher in the Department of Clinical Epidemiology at Aarhus University Hospital in Aalborg, Denmark.

These findings which should assist physicians in improving risk evaluation appear to challenge previous studies which suggests that large hip circumference may be protective against arterial thrombosis.

“Our study clearly shows that this is not the case for venous thrombosis,” adds Severinsen.

The latest findings were noted to have not included the differences between types of fat tissue. However, they indicate that there could perhaps be few differences between the type of fat distribution in VTE in contrast to coronary heart disease. Severinsen claimed that peripheral obesity measured by hip circumference has not been previously reported in association with coronary heart disease.

“Until now, the importance of fat distribution and VTE risk has not been evaluated. Our hypothesis was that fat tissue was a risk factor for VTE, independent of the distribution of the fat, and we established this,” she continues.

Severinsen was of the opinion that additional studies could possibly be required in order to elucidate the mechanism underlying the associations. Furthermore, limitations of the study were believed to have included probable weight change of participants during follow-up, chiefly obese participants who gained more weight as compared to leaner participants. Allegedly, this could have left study experts to underestimate the effect of obesity.