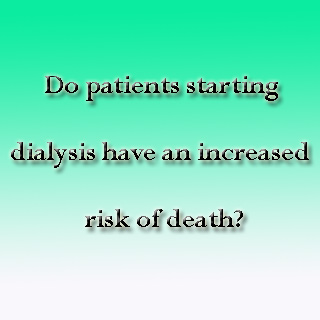 Dialysis is mainly used to offer a false replacement for lost kidney function due to renal failure. A new study claims that as opposed to the general population, patients beginning dialysis apparently have a bigger danger of death that is supposedly not attributable to an increased rate of death from cardiovascular causes, as formerly believed.

Numerous studies have demonstrated that cardiovascular disease accounts for around 40 percent to 50 percent of deaths in patients suffering from end-stage kidney disease. These statistics were provided as background information.

The authors mentioned, “It is believed that the life span of patients receiving dialysis is reduced mainly as a consequence of premature cardiovascular death.”

Around 1, 23,407 European patients receiving dialysis were examined by Dinanda J. de Jager, M.Sc., of the Leiden University Medical Center, Leiden, the Netherlands, and colleagues. They predicted cardiovascular and noncardiovascular rates of death among them and compared these estimates with mortality data from the common European population, via data from between January 1994 and January 2007.

Examination signified that the by and large all-cause mortality rate appeared to be more in patients beginning dialysis as opposed to the general population.

The authors further added, “In summary, the present study shows that cardiovascular and noncardiovascular mortality are equally increased during the first 3 years of dialysis, compared with the general population.”

This study was published in the JAMA.