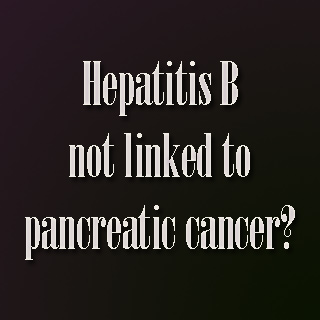 Hepatitis B is known to be an inflammation of the liver caused by a viral infection. A novel study claims that hepatitis B may not increase the risk of pancreatic cancer but age can do.

According to the National Cancer Institute, more than 35,000 people in the U.S. are estimated to die of pancreatic cancer every year and nearly 42,000 novel cases are diagnosed. Apparently, the survival rates for patients with pancreatic cancer are poor.

Moreover, according to the Centers for Disease Control and Prevention, an estimated 800,000 to 1.4 million people suffer from chronic hepatitis B infection. In 2007, an estimated 43,000 people in the United States were noted to have been recently infected with hepatitis B. However, many cases appear to have not been reported because many people do not have symptoms.

For the purpose of the study, the authors were believed to have made use of data from Henry Ford Health System and examined more than 74,000 patients who were tested for hepatitis B between the year 1995 and 2008. In the overall analysis, only age appears to have been found to be a considerable predictor for pancreatic cancer.

Lead author of the study, Jeffrey Tang, M.D., gastroenterologist at Henry Ford Hospital said that, “We looked at the incidence of pancreatic cancer among hepatitis B-infected patients over a 13-year period and found that we could not confirm a higher risk for those with a previous exposure to hepatitis B, as a prior study suggested.”

The findings of this study seem to oppose an earlier study in 2008 that suggested a link between pancreatic cancer and previous hepatitis B infection.

The findings of the study will be presented at the American Association for the Study of Liver Diseases’ Annual Meeting in Boston.