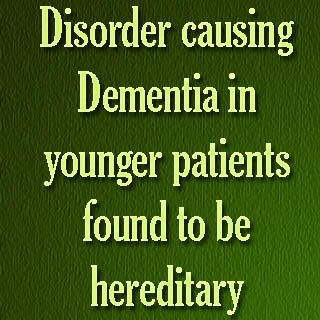 A latest study from University College London shows that a rare brain disorder that causes early dementia seems to be extremely hereditary.

The brain disorder, called frontotemporal dementia was believed to have been previously known as Pick’s disease. Moreover, it seems to destroy parts of the brain thereby leading to dementia as well as problems with language or changes in behavior and personality. This disease often seems to affect people under the age of 65.

“Knowing your family’s health history may be one way for people to better predict their risk of developing dementia,” says study author Jonathan Rohrer, MRCP Clinical Research Fellow at the Dementia Research Center at the University College London in the United Kingdom.

For the purpose of the study, the authors were noted to have drawn blood from nearly 225 people who were diagnosed with frontotemporal dementia. Further, they asked people about their family history of dementia and gave a score of one through four.

Apparently, a score of one represents a person who had at least three relatives with dementia and an autosomal dominant inheritance. This signified that an affected person seems to have one mutant gene and one normal gene. Furthermore, the person appears to have a 50 percent possibility of passing the mutant gene and therefore the disorder on to their offspring whereas a score of four represents a person with no family history of dementia.

Rohrer further explained that, “Many people were still found to have a strong family history of dementia even without having any of the five known gene mutations, suggesting that there are still unknown genes that cause frontotemporal dementia. Discovering new genes and gene mutations could provide another key to unlocking the doors to new treatments and prevention strategies for dementia.”

The study found that approximately 42 percent of participants seemed to have scored between a one and a 3.5, denoting they had some family history of dementia. However, only 10 percent appear to have an autosomal dominant gene history.

More so, the people in the study were also noted to have their DNA tested for five gene mutations which are thought to cause frontotemporal dementia. Mutations were observed to have been found in two of the five genes. The study also found that behavioral problems associated with frontotemporal dementia seem to be most potential to be hereditary, while language problems were the least likely to be hereditary.