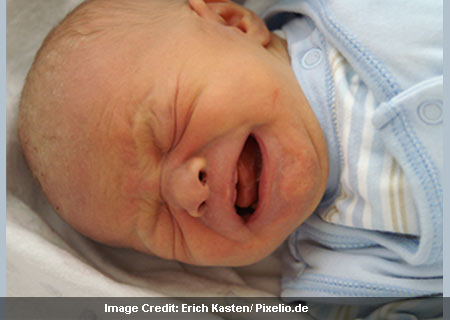 From their very early days, newborns’ cries already seem to bear the mark of the language their parents speak. Atleast this is what scientists from the University of Wurzburg claim. This signifies that the ability to actively produce language could be present much earlier than what was previously assumed.

It has long been known that babies may be able to identify their mother’s voice and can differentiate their ‘mother tongue’ from a foreign language during the last trimester of pregnancy.

For the purpose of the study, scientists were believed to have examined babies of a few days old in France and Germany. It was noted that they carried out the study on these two populations because there are particularly huge differences between these two languages in terms of intonation as a result of melody and rhythm.

They found that even in the first few days of their lives, French babies seem to cry differently as compared to German infants. Moreover, they found that tiny Germans tend to cry with falling contours whereas French newborns more often cry with an increasing melody contours. The reason may be because of the diverse intonation patterns in both the languages which are recognized by fetuses inside the womb.

The scientists also discovered that even just a few months after the newborns were born, they seemed to have mastered the skills required to produce simple melody arcs and different intonations in their cries. Apparently, the discussion mainly revolved around the question of when an ‘uncontrolled cry’ develops into the first ‘product of language’.

“The prevailing opinion used to be that newborns could not actively influence their production of sound,” says Kathleen Wermke, Head of the Center for Pre-speech Development and Development Disorders of the Department of Orthodontics at the University hospital of Wurzburg.

Instead, the belief was that, similar to young monkeys, the cry melody of newborns may have been established merely by rises and falls in respiratory pressure and is not influenced by the brain. However, this belief appears to have now been disproved by the team of experts.

“In French, there are a great many words where the stress lies towards the end, producing a rising melody, while in German it is usually the other way round,” elucidates Angela Friederici of the Max-Planck-Institute for Human Cognitive and Brain Sciences.

For instance, French children call for ‘Papá’, while their German counterparts shout for their ‘Pápa’. Kathleen Wermke was believed to have observed a similar pattern in her analysis of more than 20 hours of recorded cries.

“Newborns prefer exactly the same melody patterns that are typical of their respective mother tongues,” she says.

This denotes that the cry melody of German infants could be at its most intense at the start before then falling away whereas French infants more often cry in rising melodies and therefore put greater stress at the end. Thus, they seem to reproduce precisely the same intonation patterns that are typical of their respective mother tongues.

Scientists were of the opinion that early sensitivity to melodic features of language may possibly assist infants later on when they are learning their native language.

“The melody patterns practiced in crying are building blocks for subsequent sound productions, from cooing and babbling through to the first words and sentences,” continues Wermke.

They believe that the roots of this behavior seem to lie at the beginning of the evolution of spoken language several million years ago. In addition, it appears to have developed together with a special kind of mother-child behavior. Wermke claimed that this novel knowledge of the early start to the achievement of language could perhaps contribute to the early detection of language development disorders and help improve treatment significantly.

“If it is revealed that the cry melody can be used as an indicator of a possible disorder, then obviously this will help early diagnoses,” she explains.

Back in 2007, a study team headed by Wermke was believed to have established that the melody patterns of cries in young infants are a probable risk indicator for later language development disorders.

Currently, Wermke along with her colleagues anticipate to study in greater detail that whether newborns actually cry in their native language right from the outset. Also, they have already gathered the cries they require in other countries, and the analysis seems to be in process.

The findings of the study ‘Newborns’ cry melody is shaped by their native language’ have been published in the journal, Current Biology.