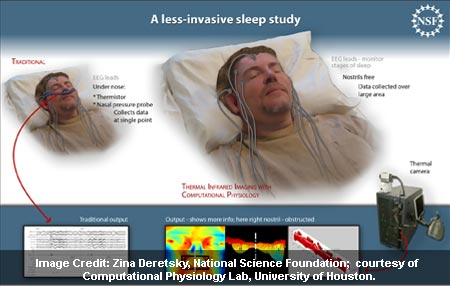 Sleep apnea is a major condition supposedly affecting millions of people worldwide. To eliminate this problem, a computer scientist from the University of Houston and a doctor of sleep medicine at the University of Texas Health Science Center at Houston have joined hands to produce a novel, less invasive technique of detecting sleep apnea.

Sleep apnea is said to be a grave disorder that apparently causes an individual to briefly stop breathing while they sleep. These gaps in breathing may take place several times an hour, and could cause depleted oxygen levels in the blood and persistent sleepiness, which in turn could result in fatal accidents. Sleep apnea is also claimed to be related to a variety of severe health problems counting depression, heart disease and stroke.

Roughly 24 percent of men and 9 percent of women suffer from sleep apnea, but receiving a diagnosis engages a process known as polysomnography, also called as a sleep study.

Ioannis Pavlidis, Eckhard-Pfeiffer Professor of Computer Science at the University of Houston, and co-investigator of the study, commented, “It’s not as simple as paying a visit to the doctor in the morning for an hour and walking away with a prescription. You have to undergo overnight monitoring in a sleep lab. The subject is wired and sleeps there. Sometimes, the subject has to spend more than one night.”

In addition to the trouble in receiving a sleep apnea diagnosis, is apparently the invasive temperament of present examining techniques.

Jayasimha N. Murthy, assistant professor of medicine from the Division of Pulmonary Critical Care Sleep Medicine at UTHSC at Houston and study co-investigator, commented, “During a sleep study a subject has an average of more than 20 sensors attached to the head and body. It’s a very complex procedure where many physiological parameters are simultaneously monitored to help in the diagnosis of sleep disorders. However, these sensors can disturb sleep and contribute to the patient’s anxiety.”

Pavlidis mentioned, “In contrast to the traditional one-dimensional methods, this new method is an imaging one and thus, multi-dimensional. We now can see how airflow is distributed locally throughout the extent of the nostril. We get not a single, but multiple values for each nostril at every point in time and this makes a lot of difference when it comes to appreciating subtle pathology.”

The novel investigative process created by Pavlidis, Murthy and their colleagues supposedly utilizes a thermal infrared camera to observe breathing waveforms and airflow as a patient breathes in and out of his or her nose. The measurements are apparently processed via computational algorithms and generate outcomes that have supposedly proved to be as precise as conventional polysomnography. The new technique also claims to offer doctors with more details about the patient’s breathing.

The experts are of the opinion this new technology may perhaps alter the way in which sleep apnea is detected. This could help millions of people to have better sleep and probably live longer.