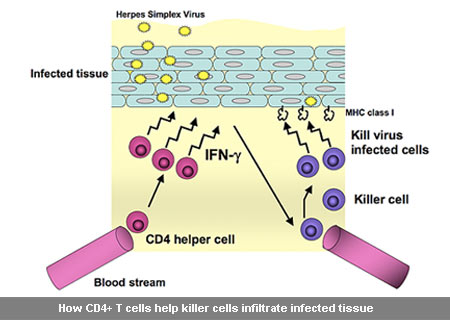 Every day scientists are striving hard to find out more about our immune system by various researches. Well, this research from Yale apparently throws light on the internal mechanism of the immune system. Unknown particulars of how CD4+T helper cells could activate the body’s immune system to combat infection were supposedly revealed in the research.

T helper cells are apparently needed in order to produce the white blood cells that destroy virus-infected cells. But the researchers demonstrated that even at their strongest, those white blood cells require support to really penetrate the contaminated tissue. The system by which they receive that assistance was formerly unidentified.

The researchers contaminated mice with Herpes Simplex Virus 2, which may result in genital herpes. They discovered that CD4+ T helper cells secreted the cell-signaling protein interferon-g (IFN- g), which supposedly augmented the speed of the enrollment of killer cells to the location of the infection and apparently enabled them to penetrate the infected tissue to initiate their combat.

Lead author Akiko Iwasaki, Ph.D, associate professor of immunobiology at Yale School of Medicine, mentioned, “Our data indicate that the help is actually indirect – the CD4+ T cells alter the local tissue environment, inducing the expression of proteins necessary for killer cells to enter from the bloodstream to the site of infection. Our research could help design new cancer treatment methods that enable killer cells to enter the tumor mass and destroy it. And in autoimmune diseases, it could help researchers prevent the unwanted migration of killer cells that harm healthy organs.”

Researchers anticipate that in the future they could utilize this discovery to plan additional effectual treatment of infectious diseases, in addition to autoimmune disorders and cancer.

The research appears in the online publication of Nature.com.