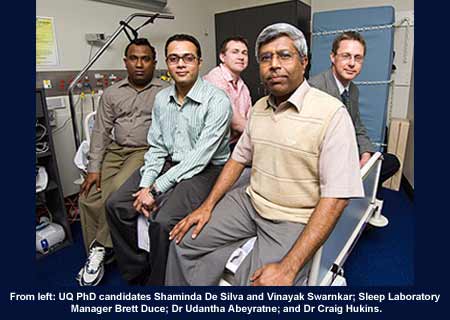 A group of researchers from The University of Queensland and Brisbane’s Princess Alexandra Hospital are believed to have developed a non-invasive way of diagnosing Obstructive Sleep Apnea (OSA).

OSA is known to be caused by the breakdown of the upper air passage during sleep. Also, it is Australia’s most common sleep disorder, affecting nearly 800,000 people. Supposedly, the common symptoms of OSA include snoring, waking abruptly and daytime sleepiness. Moreover, if is left untreated, it could possibly result into stroke, diabetes and heart disease.

Lead researcher, Dr Udantha Abeyratne from the School of Information Technology and Electrical Engineering said that, “OSA has snoring as the earliest symptom; almost all patients snore.”

The researchers have developed numerous techniques to diagnose OSA via snoring sounds alone. Sounds seem to be obtained by means of non-contact recording devices, and features are taken out. Presently the team seems to be capable of screening OSA with greater than 90 percent sensitivity and specificity.

“These results are unmatched in the world in terms of the non-invasiveness and performance, and unequivocally illustrate the viability of a snore-based, non-contact OSA screening device,” adds Dr Abeyratne.

Currently, OSA is known to be diagnosed with Polysomnography (PSG), which entails a full-night laboratory stay in a exclusively equipped sleep suite that is connected to more than 15 channels of measurements.

Co-researcher, Dr Craig Hukins, director of the Sleep Laboratory at the Princess Alexandra Hospital stated that, “PSG is inconvenient, expensive and is not suitable for mass screening of the population, especially children.”

The inadequate facilities around the world appear to have created long waiting lists. The researchers claimed that there is a huge clinical requirement for a basic diagnostic instrument that is capable of convenient and trustworthy screening of OSA in a home setting. It was observed that the home screening method designed by Dr Abeyratne’s team is likely to be available within the next two to five years.

In addition, the external pressure seems to prevent the upper airway from collapsing. However, no effective technique seems to be present to measure the effectiveness of the treatment in home-use.

In order to solve this problem, Dr Abeyratne and his team are believed to have proposed developing technology centered on breathing sound analysis. The outcomes appear to have the likelihood in transforming the diagnosis and treatment of sleep apnea. The team anticipates that in the future they may be able to develop a method of monitoring the treatment of OSA.

Curing substances can supposedly be developed from the scarce Devil’s claw...