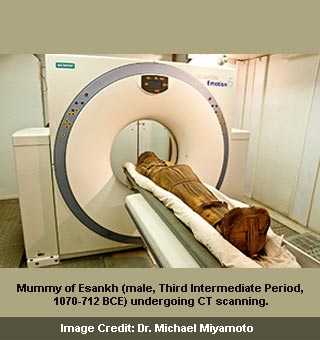 A latest study has discovered that atherosclerosis appears to have been prevalent in ancient Egyptians. This apparently challenges a belief that vascular disease is a recent problem caused by present-day risk factors such as stress and sedentary lifestyles.

Atherosclerosis is known to be a condition where the arteries get hardened. The study authors from the US were believed to have visited Egypt in order to evaluate the occurrence of cardiovascular disease in 3,500-year-old mummies. In 2009, Miyamoto along with his team of cardiologists and Egyptologists cautiously examined 22 mummies from the Museum of Egyptian Antiquities via a six-slice CT scanner.

Co-author of the study, Michael Miyamoto, MD, a graduate of the UC San Diego School of Medicine and assistant clinical professor, a cardiologist said that, “Our findings show that atherosclerosis is not strictly a disease of modern humans caused by unhealthy lifestyles. In fact, it is possible that humans have a genetic predisposition to the development of atherosclerosis. Our findings remind us of the value of preventive medicine in eliminating or controlling manifestations of heart and vascular disease.”

They found that inside the mummies with particular arteries, more than half seem to have calcifications in the walls of their arteries. Moreover, those who died after the age of 45 appear to have showed the maximum degree of calcification. In addition, vascular disease was observed in both male and female mummies.

Miyamoto further said that, “As the mummy CT images appeared on the monitor, we were struck by the fact that our project was made possible by combining the advanced technologies of two different eras – the science of mummification in ancient Egypt and modern imaging. In a real sense, this was a scientific collaboration that spanned great time and distance.”

The oldest mummified Egyptian exhibiting the maximum degree of atherosclerosis was believed to be Lady Rai. The nursemaid to Queen Ahmose Nefertiti, Lady Rai lived to an age between 30 and 40 years old circa 1530 B.C. To put this in context, Lady Rai lived nearly 300 years prior to the time of Moses and two hundred years prior to King Tutankhamun.

Astonished by their findings, the cardiologists asked the Egyptian preservation team to share information about the lifestyle of ancient Egypt. Generally, all who were later mummified appear to have served in the court of the Pharaoh or as priests or priestesses.

Diet-wise, eating beef, duck and other poultry seems to have been common. Since refrigeration was unavailable, salt was extensively used for meat preservation. Furthermore, tobacco was not available and without mechanical transportation, they may possibly also have been physically active.

The findings of the study have been presented at the American Heart Associate 2009 Scientific Sessions and published simultaneously in the Journal of the American Medical Association.