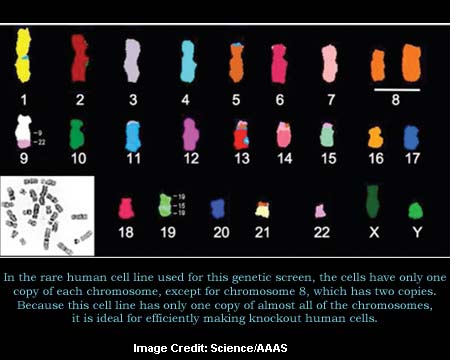 Whitehead researchers are believed to have developed a novel type of genetic screen for human cells to identify specific genes and proteins used by pathogens.

In the majority of human cell cultures genes are known to be present in two copies namely one inherited from the father and one from the mother. Thus, gene inactivation by mutation seems to be unproductive because when one copy is inactivated, the second copy typically remains active and takes over.

For the purpose of better understanding this criterion, Jan Carette along with his colleagues were noted to have made use of yeast cells in which all genes are present in only one copy i.e. haploid yeast. Currently, they appear to have used a similar approach and used a human cell line. Supposedly, in this human cell line, approximately all human chromosomes are present in a single copy.

Furthermore, in this rare cell line, researchers generated mutations in nearly all human genes. More so, they seemed to have utilized this collection in order to screen for the host genes used by pathogens. By means of exposing those cells to influenza or to various bacterial toxins, they were observed to have isolated mutants that were resistant to them.

Later, Carette seemed to have recognized the mutated genes in the existing cells, which code for a transporter molecule and an enzyme that the influenza virus hijacks to take over cells. Moreover, they were believed to have worked with Carla Guimaraes from Whitehead Member Hidde Ploegh’s lab. Carette appeared to have focused knockout cells to numerous bacterial toxins to identify resistant cells and hence the genes responsible.

Lead researcher, Jan Carette, a postdoctoral researcher in the lab of Whitehead Fellow Thijn Brummelkamp lab said that, “We were surprised by the clarity of the results. They allowed us to identify new genes and proteins involved in infectious processes that have been studied for decades, like diphtheria and the flu. In addition we found the first human genes essential for host-pathogen interactions where few details are known, as is the case for cytolethal distending toxin secreted by certain strains of E. coli. This could be important for rapidly responding to newly emerging pathogens or to study pathogen biology that has been difficult to study experimentally.”

The findings of the research revealed an earlier uncharacterized gene as crucial for intoxication by diphtheria toxin and exotoxin A toxicity. Moreover, s cell surface protein could possibly be required for cytolethal distending toxin toxicity.

Having knockout cells for nearly all human genes in their freezer may perhaps open up a wealth of biological questions that they can examine. Also, many aspects of cell biology that can be studied, knockout screens could possibly be used to unravel molecular networks that are broken by a battery of different viruses and bacteria.